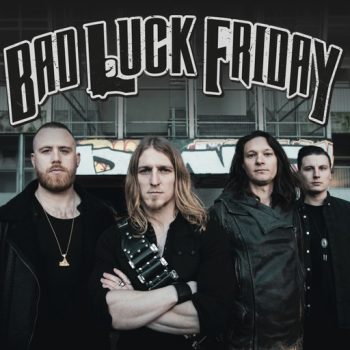 Bad Luck Friday are a young/new band from Brighton in England. They formed in 2020 and are releasing their debut Friday, September 2nd on Wilde Fire Records. Two years in the making but there was a huge bloody pandemic in the middle, so they have done well in my opinion! The band are comprised of Will Wilde on vocals and harmonica,  Steve “The Beak” Brook on guitar and backing vocals (who formed the band together as they were fed up not being able to gig and decided to create something rather than twiddle their thumbs) and also Jack Turnbull on bass and Alan Taylor on drums. The band wanted to mix 70s bluesy hard rock with some of the heavier edged alternative music of the 90s. There are more harmonica than guitar solos, but boy, does he play a mean harp! In the notes with the release he aims to do solos that owe as much to Slash or Angus Young as they do to someone like Sonny Boy Williamson. So how does it sound?

They open with the song that is not only the name of the album but the band themselves. Yes it is “Bad Luck Friday” a track that definitely plays on the old story of selling your soul to the devil. On this track it would appear it has already been sold and there is no chance of turning back or getting a refund. It opens with the lyric line “I was born on Bad Luck Friday” before kicking into a good solid riff with the guitar doing a repeat of the opening vocal melody line between the gaps. All nicely constructed. The good news is that it grooves, has a chorus to sing/scream and will, without doubt, cause toes to tap and heads to bob! They do mention the “thirteenth day of May” a couple of times, not sure if perhaps that is the singers birthdate or if it just fitted the song!

They keep the whole deal with the devil vibes going on song two “666 At The Crossroads” which is a 1980s style stadium pleaser with the drop down section even quite sleazy. The riff is quite fast and incessant whilst the chorus is very infectious with even some “ohs” being sung between the numbers 666.

“Banshee” comes from an incident in 2019 where Will broke his neck and thought he was going to die and he felt like death was approaching. The “Banshee” in Irish legend screams warning of death. They open with screaming or wailing leading to the harmonica coming in followed by the band. It is a darker sounding song befitting the subject matter.

Next up is the ballad of the album “Dust & Bones“. There is a mix of both Free and Alice In Chains on this. The opening lines go “Got to get this off my chest, this woman” where he takes a long pause before going “I think you know the rest“. I did laugh as yes, this is a tale as old as time. Broken relationships and the pain coming from them. The guitar solo (this song is one of the few with one) hits the right mood and pacing for the song. The mixing of the bands mentioned is actually very good, they merge nicely. Living proof that much of the “Seattle/grunge” actually had a real connection to classic hard rock as well as metal. 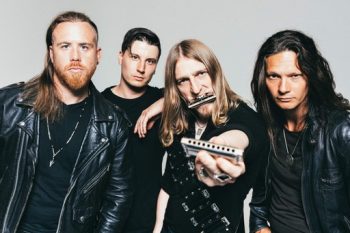 Bad Luck Friday: Here Have A Mouth-Organ! Pic By Rob Blackham, Thanks.

“Jealous Woman” is another groovy hard rock that is very 1970s, plenty soul and funk with some mean harmonica playing going on along with a guitar solo at one point. Lyrically it poses this thought “I never treat her dirty… but looking ain’t a sin” which may cause arguments among some!

“Take The Best Of Me” starts with harmonica, then drums and finally the whole band with the harmonica still giving it laldy. This is quite funky (think Deep Purple mark 3). Lyrically he is singing to someone who has angered him, promising all kinds of retribution from burning his mouth so he can’t talk and tying up the feet so he can’t walk, in fact even his God couldn’t help him if he wanted to such is his endeavour to tear this person down. A definite “fuck this guy” vibe going on here😂. Even the bloody harmonica solo sounds angry and evil.

“Mistress” is dirty, filthy and all about being dominated. “I want you to be my mistress, I wanna be your slave” he sings. He wants pain and punishment (kinky bugger) whilst the music grooves and sashays away. There is a riff on this which is very similar to “Hash Pipe” by Weezer (no complaints here, I rather like them) but it isn’t all the way through. The line about “Safe words” is very Paul Rodgers. Really fun song all round.

“Low Down Dirty” apparently was inspired by the lyrical stylings of B B King on the song “How Blue Can You Get“. The song itself reminded me of the brilliant “Down Payment Blues” by AC/DC from the Powerage album (still their best in my humble opinion). In this he has lost his lady, his money and it seems his mind. What is actually left to lose (“how blue can you get“)? The riff is slower, heavier almost doomy and as dirty as required for the story.

“Bonnie To My Clyde” is about being in a harmful relationship which for some reason you can’t get out of. You know the person is bad for you, but you still “love them”. It is like he is “deaf, dumb and blind” to it all. The whole lyrical section saying “gonna love you to the bitter end” is very Paul Rodgers (I think it is a line in a Bad Company song😀).

They finish with the energetic and angry “Rebel With A Cause” which channels a bit of Rage Against The Machine, but due to the lyric saying “They tore the sun from the skies, right before our own eyes” and also the “they built their towers from our stolen dreams“, I’m also of the opinion that someone likes Ronnie Jame Dio (think for instance the way he uses light/darkness in some songs and the idea of “building towers“) when it comes to writing lyrics. The lyrics are all by Will along with Sara Starbuck, so one of them I guess listens to Dio! Big riff, heavy grooves and lyrics that suggest it is time to burn shit down as society is screwed certainly fits well with stuff happening at the moment. “Let the riot be the voice of the unheard” he sings before saying we should take action. This is the one song that could start a mosh pit if not a riot!

At the beginning I mentioned they were blending 70s blues rock and 90s alternative and that is what is beautifully achieved here. Anyone looking for completely original music need to look elsewhere (good luck with that anyways) but for folks that want groovy well constructed rock music with massive choruses and fun lyrics then look no further. Like the blues but prefer it merged with hard rock, then this is the place for you. If you wonder if harmonica truly works in rock, then get your lugs (ears) around this. The solos are like rock guitar solos but just on a “moothie”(as we say in Scotland). 10 songs, 9 which rock nicely and one a good solid ballad. Make your day a lucky one by getting your ears (and hands) around this cracker of an album!

Purchase CD Via Their SHOP