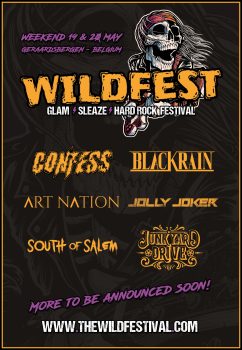 The first blast of bands for the 2023 edition of Wildfest Festival in Gerraardsbergen Belgium has been unveiled! And it’s a hot one!

Ticket sales will start in a couple of weeks, together with the announcement of more exciting names!

For CGCM‘s Rich “The Meister” Dillon, our resident traveller and festival attendee Blackrain and Jolly Joker are both bands he’s not before witnessed on stage. That’s actually a bit of a feat considering how many events that guy attends!

He further says that Art Nation and Junkyard Drive both delivered solid performances in the respective years he caught them at Sweden Rock. The only times he’s seen both bands on a stage.

Then we come to South of Salem and Confess! Meister caught South of Salem for his first and only time (to date😁) at Call of the Wild Festival the week before Wildfest back in May. Scorching performance he reported. Confess just destroyed the day at HRH Sleaze Festival in another first time band Meister‘s seen on stage! What a set that was!

So to recap, out of six bands announced, Wildfest has succeeded in dropping 4 bands Meister has only seen once before. AND two that he’s never seen! That’s totally unheard of with the amount of events the little CGCM travel bug attends! Well done, Wildfest, you’ve pleased The Meister and trust us here at CGCM when we say he’s a cranky bugger🤣.

CGCM‘s Rich “The Meister” Dillon attended the 2022 edition back in May. And he absolutely loved the event, the bands, the people attending and organizing. You can read his overly lengthy blog story of his time there at the link below.