AVANTASIA – A Paranormal Evening With The Moonflower Society – (Album Review) 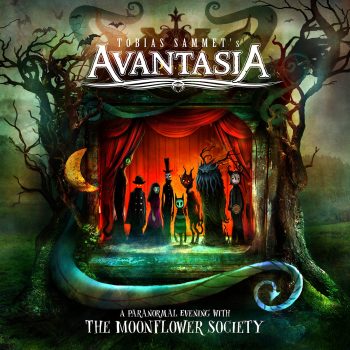 Are We Ready For Dark And Mysterious?

Avantasia are releasing their brand new album A Paranormal Evening With The Moonflower Society on Nuclear Blast Records on Friday 21 October.

The album which is the band’s ninth and the follow-up to 2019’s Moonglow is according to mastermind, vocalist, also bassist, keyboardist and co-producer Tobias Sammet about “the weird characters I populate my songs with and on the other hand for all the weird characters I surround myself with in Avantasia“.

A Moonflower is, of course, a flower that comes out, and opens itself up during the night hours, the dark; so fitting for the world of Avantasia which is inspired to a certain extent by his dreams or nightmares and are as stories often dark and mysterious.

The album is co-produced by guitarist Sascha Paeth and I imagine (as information isn’t given on the press notes) helped along by the keys and orchestration of Michael “Miro” Rodenberg who has been involved since The Scarecrow back in 2008. As usual, there is an array of vocalists with many regulars such as Michael Kiske, Jorn Lande, Ronnie Atkins, Bob Catley, Eric Martin and Geoff Tate. This time around he has 2 new to the band singers in Ralf Scheepers and Floor Jansen. The album is one of the shortest, if not the shortest at around 50 mins with most songs coming in around 3 or 4 minutes. Songs are concise or perhaps better to say incisive, there is very little padding musically. There is a theme that perhaps with a full lyric sheet might become clear in time.

One of the things I feel about this new album is that there are more heavy metal-style songs, tracks heading into the original areas of power and speed metal along with straight-up heavy metal.

The band has of course moved away a bit becoming more symphonic and even quite pop in style. That all remains here but the joy is we hear some fast metal and shredding guitar along with some great old-school solos. Nowhere is that more apparent than on “The Wicked Rule The Night” which features Primal Fear‘s Ralf Scheepers who approaches the lyrics in the same way he does as his day job, high pitched and fast with an opening scream to wake the dead! I imagine live the shout of “FIRE” will see plenty of pyro going off on stage.

“Rhyme And Reason” is another heavy track but surprisingly the co-vocalist is none other than Eric Martin who shows he can still rock out when required. The drums on this rattle along like a train on tracks going hell for leather, even when it mellows it is still pretty darned fast. Eric sounds superb on this steamroller of a song. 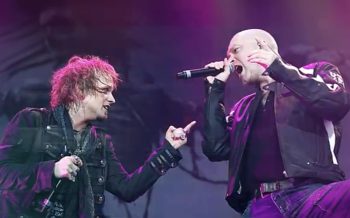 The track involving Michael Kiske is of course very much in the Helloween mode. Despite the frantic and often heavy nature of the track, it is still incredibly melodic. There is a joyous vibe, the music is uplifting and the chorus sounds like it has the most important message possible… even if it hasn’t, it demands your attention and is so melodically moving.  It is another track where drummer (I imagine it is still the same guy) Felix Bohnke lays down some fine fast drumming.

It is also noticeable that on this album there seem to be more metal guitar solos. Screaming solos that fit each song… well, apart from the slower tracks (more on that shortly). One of the songs Jorn Lande sings on, (the one he features on specifically) “I Tame The Storm” is another heavier track that reminded me of Maiden in places, certainly, the bass is very noticeable on this, but it still has that Avantasia sound meaning it is infectious as fuck. Even though there is more heaviness (at least in my view) on this album there is still an abundance of melody.

“The Moonflower Society” featuring Bob Catley is one of those pop meets metal, both stomping and fun, songs to bounce along with. I can’t imagine anyone not ending up joining in with the chorus, even the most curmudgeonly amongst metallers surely couldn’t stop themselves, even if they wanted to! I can see this being a live favourite.

“Scars” makes good use of Geoff Tate‘svoice. The song reminded me in places of the more experimental post-Empire Queensryche. The difference between the style and sound of the verses compared to the chorus is bigger here than most as the chorus is more straight-ahead rock and the verses off-kilter and experimental. Like much of the album Tobias has written the tracks with definite singers in mind, the songs are perfect for each artist. He gives them something to shine on and Geoff certainly does on this.

Floor gets 2 songs to show her chops, firstly on the more symphonic “Kill The Pain Away”  where it goes full Nightwish meets Epica with choirs and orchestration. She shows her power on this which means that Tobias has to sing his ass off to keep up… and he does! The dueting is perfect, utterly beautiful.

“Misplaced Among The Angels” conversely shows the more sensitive side of her range at one point Floor hits some very deep notes. It leaves one wondering if there is anything this lady couldn’t do. The song itself floats between gentle piano and vocals to full-on arena rock ala the 1980s, lighter in the air swaying from side to side. Cracking song. 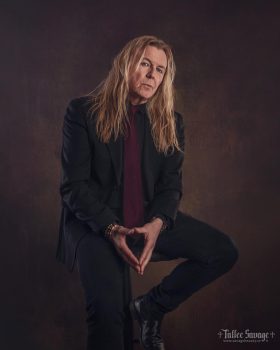 That leaves 3 tracks to mention, firstly “Paper Plane” (no not a cover of the Status Quo classic) featuring Ronnie Atkins on vocals. Although for me the weakest track on the album it isn’t a bad song as such. It is very poppy and rather whimsical in style. I do like the way it starts to soar musically… like a decent paper plane? I personally am just glad to hear Ronnie sounding so terrific despite his fight with cancer which is still ongoing. All the folks involved here at CGCM send our best wishes to him and his family.

The opening song “Welcome To The Shadows” has a slight Mike Oldfield vibe in that one of the melodies has a hint of The Exorcist theme music going on. To counterbalance that we have choirs and an almost religious vibe at other points of the song. The intro is quite creepy (as it features that theme tune) until a huge drum roll kicks in followed by a massive chorus. This is the only track that doesn’t feature any guest singers.

The last song “Arabesque” has an Arabian theme running through it but strangely manages to sound rather Scottish due to the sound of (I think) keyboard-sampled bagpipes. If they actually have used a real piper then I assess he/she will never die..! The track is by far the longest at just over 10 minutes and Tobias has thrown everything at it, choirs, orchestration, dual vocals from Jorn and Michael, basically the whole kitchen sink. I love the pipe sounds and the marching drums where as a listener it feels like one is going into battle before going all-out symphonic metal. I loved the whole over-the-topness of it.

Final Thoughts, Mixing up The Styles And The Guests

A Paranormal Evening With The Moonflower Society is definitely more in your face than the last few albums, shorter songs on the whole whilst also bringing back a bit more of the heavy metal that the band were more originally known for. As always all the guests do a great job and it is good to hear a couple of new additions to the group adding to the variety.

There are not many times where guests can sing together or at least trade lines as previously (perhaps Covid made that seem more awkward?) so most of the songs are duets with Tobias who I think sings his ass off throughout. I can see most of the songs easily fitting into live sets, there is an immediacy to the songs and an energy that will make them work onstage. Also, Tobias has a knack for writing great rousing choruses, he never seems to run out of them. That in itself is a skill set that many folks would kill for! I think this might grab back some folks who maybe felt the band weren’t metal enough in the last few records whilst not alienating anyone who loves their symphonic and poppier tracks. Very nice mix of styles, great album!

Check out my other articles and reviews here.