SAVAGE MASTER – Those Who Hunt at Night (Album Review) 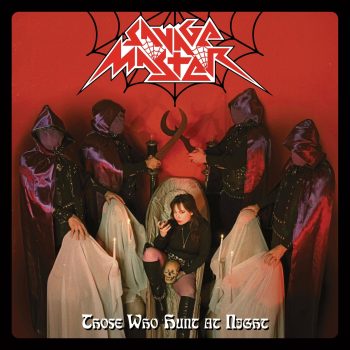 Savage Master return to the leather-clad, whips and chains world of traditional metal with their latest offering, Those Who Hunt at Night.

Back in 2019 their previous release, Myth, Magic and Steel was my number-one pick of the year. It has everything any metalhead would want. Searing vocals, crunching riffs and quality solos. All this added up to a peach of an album that still gets spun to this day. Check out my review here. You can also catch up on The Meister‘s Savage Master thoughts here.

The big question is can Those Who Hunt at Night reach the heady heights of its predecessor?

All the early signs are good with the Savage Master line-up remaining the same. This is Stacey Peak (aka Stacey Savage) front and centre on ball-busting vocals, Adam Neal and Larry Myers on guitars and John Littlejohn on drums.

The image is also maintained with Ms Savage controlling her hooded henchmen, as seen on the album cover. So what about the tracks?

Stacey Savage hits the ground running and is in full attack mode from the off on the opening track “Hunt at Night”, stirring stuff. Choppy riffs accompany her to great effect. 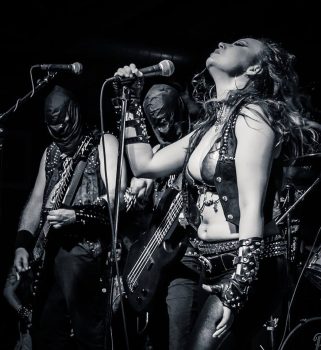 Twin lead riffage welcomes us to “Eyes Behind the Stars”. The track is less intense yet more melodic with Maiden-inspired riffs. The solo is brief but a joy.

Another similarity this album has to Myth, Magic and Steel is the production. It lets the music breathe and maintains an early 80’s vibe which I love.

“Rain of Tears” is a healthy romp of a track, reminiscent of Rock Goddess. Another well-constructed solo finishes it off nicely.

If headbanging and first pumping are your thing (and let’s be honest, that’s why we’re here) look no further than “Spirit of Death”. It’s rocks like hell and will get the blood flowing.

The form is maintained on “A Warrior’s Return” and “The Hangman’s Tree” with power and pace prevalent in both. The Maiden influenced riffs are also at the forefront of the latter track.

“Queen Satan” has a feel of Lucifer, hitting us with a deeper tone. Apt, considering the song title….

Rattling on at a fair lick comes “Vaster Empires” which contains one of, if not the best, solo on the album.

All too soon comes the climax in the form of “The Death of Time”. An atmospheric doom-laden track that does not possess the pace of all previous tracks, but has feel and depth.

So, in answer to my question, Those Who Hunt at Night does not quite reach the heady heights of its predecessor but it comes quite close and is by no means a disappointment. It has all the Savage Master trademarks and is well worth investing in.

Out now via Shadow Kingdom Records.

Check out my other reviews and articles here