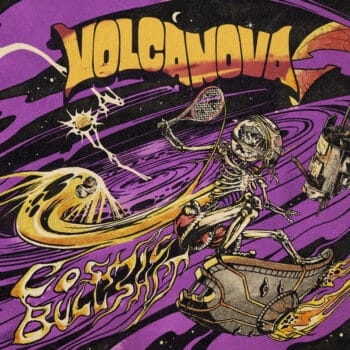 Volcanova: Cosmic Bullshit: Out February 25 On The Sign Records

Volcanova are a 3 piece Icelandic band that formed around 2014 and released their debut album Radical Waves in 2020. It took them a long time to actually get to play it live courtesy of you know what. However, they kept busy anyways and have a brand new EP Cosmic Bullshit comprising of 6 songs ready to hit the world on February 25 on The Sign Records.

All 6 songs feature huge riffs, tasty guitar solos, fuzzy bass (at times) and enough drum fills to keep air drummers everywhere very happy indeed. Oh and cowbell, so much so that Blue Oyster Cult could get very jealous indeed! Bollocks to subtlety in that department. Right from the first moments on “Salem” it is heavy, groovy metal with riffage aplenty. It (like much of this EP) stomps along very nicely indeed. The vocal harmonies add a 60s vibe to it all. They vary things up tempo-wise on most tracks, on this it goes quite doomy, the riff is played but with longer open spaces added.

Did I Mention Cowbell?

“Gold Coast” features a superb opening guitar line that is so melodic whilst kicking like a mule. This has such a massive fuck off groove running right through it. Did I mention cowbell? Half the track is done before we even get a vocal line. There are some twists and turns as well keeping it entertaining.

“Desolation” is a fast-paced rocker for the most part. It does drop down to just bass and some drum fills at one point which is handy as it gives the listener a chance to catch their breath. There is a very early Ozzy sounding vocal on this (along with the melody and mood this could be a missing track from “Volume 4“). 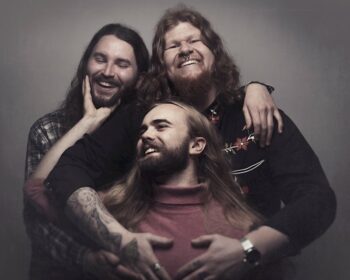 Vocanova: The Band. Cosmic but certainly NOT bullshit!

“End Of Time” has a lovely acoustic guitar opening in which the sweet melody continues onto electric and into the main body of the track itself as it heavies up. After a minute or so it alters with a new riff and vocal line which itself changes as the guitar solo comes in. The bass and drums seem to take turns holding it all down rhythmically.

“No wheels” is quite a frantic piece, almost punky, although not fully as it opens with cowbell which I can’t remember any punk band doing. It goes at a breathless pace apart from the slightly slower sludgy surround to the chorus.

Saving The Best To Last

The last track is the longest at just under 7 minutes. “Lost Spot” does leave (in my opinion) the best to last. It is almost 2 songs in one. It opens with a good heavy stoner rock groove with drum fills aplenty. There is an air of commerciality to it, infectious especially with the harmonies on the chorus until nearly halfway through.

Then it slows down, more of a doom track with dirty sounding bass thundering through the speakers, then in come some synths (I assess it is synths they have used) making atmospheric or ambient sounds, then slowly the guitar comes in over both with an almost hypnotic feel. Of course, it doesn’t stay that way. No, it turns around into another gargantuan riff before they bring the vocals back in albeit sounding heavier than before due to the new intensity. Bloody marvelous stuff.

“Cosmic Bullshit” is even better than the name suggests, full of great sounding riffs, bass and drum fills and of course cowbell. Stoner rock but with enough hooks to pull in those who prefer more traditional heavy metal or 70s hard rock. It sounds fantastic and it is music that it is impossible not to end up grooving along too. I admit to playing this on repeat several times in a row when I listen, as being an EP it leaves you wanting more. Cosmic definitely, bullshit absolutely not!  The EP is out Friday 25 February!