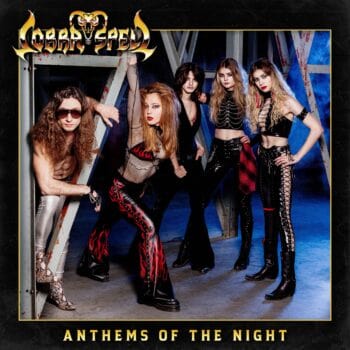 COBRA SPELL – Anthems Of The Night

International heavy metal act COBRA SPELL sheds its skin and unveils the first single from their upcoming second EP, Anthems Of The Night, out March 31 via an independent release.

With “Addicted To The Night,” the five-piece shows off their prowess and destiny to rule the world by way of guitar shredding, sprawling melodies, over-the-top stage performances, and hooks worth singing along.

“This song speaks about the combined addiction to drugs and nightlife. A man follows his nocturnal routine at the strip club. The excess of drugs and sex make the party seem like a huge blast. Just as the party passes its peak, he needs more to let it last just a little longer. He eventually comes down, and subsequently, the party is not as fun when he is not high — the people at the club are not as pretty anymore, the atmosphere turns uncomfortable and grim, and he ends up all alone. It’s all a fantasy created by his brain and the drugs. To numb his pain, he repeats it the next night all over again.”

Produced, mixed, and mastered by Alejandro Gabasa Barcoj, Anthems Of The Night is four songs about sleazy love, partying all night, breaking speed limits, and other tales of downright debauchery. Recorded last December at Comeback Studios in Spain, the EP is aptly fit for a nighttime Summer drive with the top down and the music loud.

1. Addicted To The Night
2. Steal My Heart Away
3. The Midnight Hour
4. Accelerate