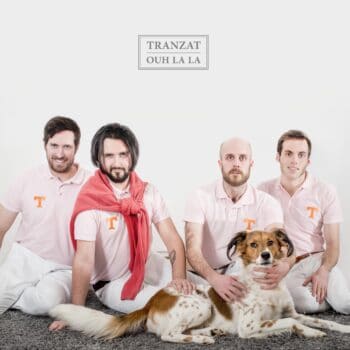 If a film or TV maker wants to portray a French person in their work they often use what is stereotypical. UK TV is particularly guilty of that. In those comedic attempts to depict a French person, you can almost guarantee someone will go “Ouh la-la” as though everybody says it constantly there. Of course, as the expression is supposed to be one that suggests surprise or a reasonably strong reaction this is a very silly characterization. So imagine my surprise (rather appropriately) on hearing an album by a French outfit called of all things Ouh La La. Are they taking the piss out of the stereotype or have they made an album to shock and surprise and felt that this was indeed an appropriate title? Only they can say what their intentions were. The band known as Tranzat hail from Brest on the west coast of France and have been around since 2015 and have 2 previous albums called Hellish Psychedelia (2016) and The Great Disaster (2018) which were self-released. This third album (out April 1) is their first on a label that being Klonosphere Records. The band says their influences are Faith No More, Devin Townsend, Mastodon and Opeth which all do come through in their music. The Devin link is very strong, that is in part due to the vocal stylings of Manuel Liegard who is very similar in places along with having a great versatility where he can go from crooner to growls with great ease. The rest of the band comprises of Nicolas Galakhoff (bass), Benjamin Arbellot (guitar) and Thomas Coic (drums). The album has 9 songs with a mix of lengths from 4 to 8 minutes and a total run time of 56 minutes.

Let’s Talk About The Songs:

There is plenty of heaviness throughout but interspersed with all sorts of other things, whether it be spoken word, a bad guitar rendition of a popular song and monk style chanting to name a few things. It is slightly bonkers, which can be jarring to some, but if it is done well then it can be not only a huge amount of fun but actually a great listen too. Opener “Shall We Dance” starts with the line “my body’s dancing on its own” which perhaps suggests that this music will make you move whether you are ready or not. It starts nice and heavy with screams going on until a large stuttering style riff comes in. Of course, it doesn’t stay that way as it drops down into a jazzy interlude and even at one point scat singing to keep the listener on their toes like a ballerina (well it is about dancing).

Does Humour Belong In Music?

The very strangely titled “Lobster Beaujolais” has a video made for it which is of course on YouTube and yes there is a man in a lobster costume in it! It actually reminded me a little of “Vampira” where Devin hams it up big time in a ridiculous red costume. The track itself has moments where the bass is very prominent and in the breakdown in the middle Manuel gets all operatic with “lalala“s and “oooohhh“s before he hits a scream and the song becomes metal once again. The opening features classical music and a glass being clinked and a group “aaaaahh” for some unknown reason. There is a mix of the aforementioned Devin, FNM and Dog Fashion Disco in both vocal and musical madness. The most important thing to note is that they do it brilliantly. These guys can play, but they obviously feel that humour does belong in music (as the late great Frank Zappa would attest). 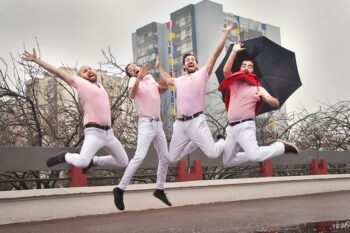 “Mr. Awesome” is one of my personal favourites here. The opening starts with a “1 2 3 4” with the band coming in before he finishes no doubt on purpose. Maybe they don’t think he is that awesome! This is a ballad with the music for the most part light and airy with some genteel cymbal work going on at times. Lyrically he sings “I have always wanted to be king for the day but the people around me never remember my name” before continuing with “I am zero, a jester of the court“. The transition halfway through is beautifully done (as they tend to be here) and the way they discreetly get from light to heavy is clever. The fact that the song can have some lovely mellow touches and some heavy screaming and in no way seem contrived and indeed flows so well is fantastic. I mentioned strange about a title before, this one is a doozy. “Climbing Tibetan Mountains To Learn The Secrets Of The Mind” (doesn’t quite roll off the tongue) has a very heavy psychedelic opening, it also sounds quite threatening or ominous, a slow thunderous riff in which a monk’s chanting comes through in. He does sing “monk teach me how” at one point so the chanting does make sense. The music becomes more uplifting and harmonious as he reaches his Nirvana (or something). The soloing on this is particularly good with lots of little flourishes style-wise. I wonder if they were influenced by “In Held ‘Twas In I” by Procol Harum due to the theme and weirdness!

“Lord Dranula” also has a video which will be posted below. It features a man in a cape surrounded by balloons. There is one major difference between the video and song and that is the badly played “Happy Birthday” tune as it is electric on the album. Done on purpose of course. He starts by inviting us to his birthday before things go wrong and demands that we bow down to him. As I said for more check below! “Morning Glories” is a longer song that allows them to extend themselves musically even allowing themselves to head into mellow Pink Floyd with extended notes and some effects. It is possibly the most cinematic track here and builds up in a similar way to say “Ocean Machine” era Devin where you are carried along with the melody. It goes a little jazzy at one point and the lyrics use some strange metaphors which get weirder as the song goes on. From “I want to drive into the cold of your oceans” continuing through to “dirty my steps on your muddy playground” which might or might not be very rude. It is certainly sublime to the ridiculous. 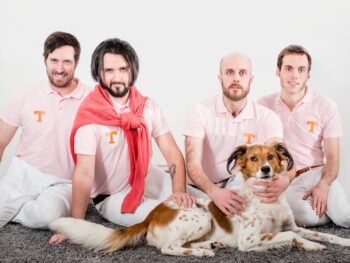 Tranzat: photo cover is based on. Lovely dog… and tops!

“My Dear Washer” lyrically takes us to a wedding so of course has some crooned vocals, well at least before he issues some death growls. Perhaps cause he can! Personally, I love the chorus on this, almost pure pop. “Pillow Fight” which is a song about pillows, duvets and fighting. Or so it would seem. This is more full-on metal for the greater part but still has time for spoken words, possibly a woman on TV giving the definitions of things. The second break is jazzy and leads to a sublime guitar solo. Nearer the end, the drummer comes into his own whilst the guitar sound effects are swirly almost dizzying.

The last song “Global Warning” starts with excerpts from Charlie Chaplin‘s speech from his film The Great Dictator where he talks about “goose-stepping our way into misery and bloodshed“. After about a minute the music comes in. It has a very emotional feel to it, it is heavy but it has some heart and subtlety about it. Being the longest track, riffs and motifs are explored a little further. The way they drop the track right down at one point and we get long single guitar notes and very delicate drumming is delightful. This allows Chaplin to come back in. It is nicely measured. When the speech comes back in it is more shouted and venomous and the music matches it. The main guitar line becomes very uplifting and hopeful. The ending is quite discordant and after a short few seconds someone says something but even with headphones, I haven’t managed to catch it.

Can I Sum Up In A Stereotypical French Way?

“Ouh La La” is definitely recommended to those who love the bands mentioned during the review, yes I have mentioned one person quite a lot but these guys are not copyists (if they were then they would be copying from one of the best artists in the world right now) but due to the voice at times along with the silliness on display it is the easiest (laziest?) reference point. If you like humour in music or at least are not put off by it then this is an album for you. Musically tight and creative and with a singer who has adaptability this is a fabulous listen for those brave enough to check it out. If I may finish with a French stereotype comment then “Bravo, bravo, encore, encore“.