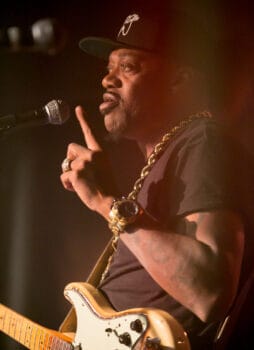 Eric Gale Do I Have Your Attention? (Photo Thanks Ritchie Birnie)

Eric Gales stopped off at the Oran Mor, formerly an old parish church dating back to 1862 in Glasgow, to play to a sold-out show to 500 people.

These folk had, as he remarked, “kept their tickets for 2 years” for which he thanked everybody whilst further remarking “it wasn’t my fault, honestly wasn’t mine” whilst laughing away.

The band came on to Carl Orff‘s”O’Fortuna” and started by playing a free-flowing jam based around the old Howlin’ Wolf song “Smokestack Lightning“, and what I mean is that during the jam they kept going into it then drifting out, sort of that was the base for them to improvise and have fun and get themselves warmed up. It also warmed up the audience who made a hell of a lot of noise cheering and clapping when it ended. It was pretty jaw-dropping stuff to be sure.

The night was focussed heavily around the brand new album Crown co-produced by Joe Bonamassa (more on him later) and Josh Smith. The first track played from it tonight was “You Don’t Know The Blues” which he seemed to slow the lyric lines down to give more importance, he seemed to have a delivery which was deeply personal not just to himself but to those in the audience. He made us focus on what it truly meant to know the blues by his passion and knowledge. The band are such a tight unit able to change gear quickly and easily. In fact the way things dropped by a little “shush” and went into a riff which he claimed he had “saved just for Glasgow” before swinging it back to the main refrain was terrific.

His patter (as we say in Scotland, or at least especially Glasgow) or chat was impressive being able to veer from serious to comedic taking in emotional and confessional with great ease. Before “Survivor” he talked about how he wanted to us to leave “inspired” in some way. He then tempered that with “and a t-shirt from the merch desk” keeping things fun. His vocal delivery at the end was so heartfelt, almost exposed in a way. He kept that emotional yet powerful performance up on “The Storm” where it was just his voice and some gentle keys as he asks us to look deep into our own hearts as to where we stand and also react when it comes to those who are different from us. There is both funk and soul running right through the core of the song and as I have said before the vocals are delivered almost direct to each of us in the crowd. My notes said  both “utterly magnificent” and “phenomenal” and I still feel that. 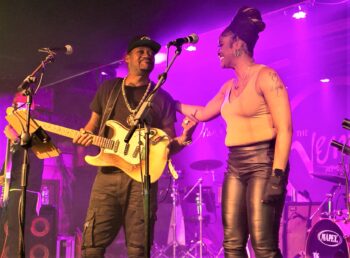 At this point, after a spellbinding bit of soloing in “The Storm” someone shouted out “Who’s Joe Bonamassa?” causing laughter and of course a response from Eric himself. He talked about his friendship and also how supportive and kind he is. Gales spoke about how when he spoke with him about producing the album Joe remarked “Yeah, mind I don’t come cheap“. He laughed and then explained how after buying 2 cans of juice (or soda) they “sealed the deal“.

After that he got back to business or as he put it “now let me do what you came to see and that is play the shit out of this guitar” and boy did he do that during “Put It Back“. Proving him to be a man of word and principal!  “Stand Up” in complete contrast was all shimmering jazz with gentle funk running through it with the keys having a major part to play. The guitar solo strangely had almost a classical vibe to it whilst still being blues and was absolutely gorgeous.

For “Take Me As I Am” he brought his good lady wife Ladonna forward from behind one of the drum kits to sing lead vocals whilst he would do backing as he said, “for a change“. The looks and smiles between them was telling. There was obviously love along with respect for each other as people and for their individual talents. This was more stripped down than the album version and felt more intimate which worked nicely. 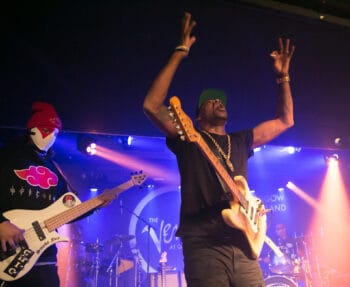 Eric Praise Be. Smokeface Behind (Photo Thanks Ritchie Birnie)

He Is Eric Gales…

“My Own Best Friend” turned into a massive funk jamboree with first-class interplay between the band and allowing the very strange-looking masked bassist Smokeface to do some tremendous bass lines the like of which this reviewer hasn’t heard since the funk explosion in the 70s. The band were having a ball and Eric was dancing around like a madman with a huge grin on his face. This was all too much it seemed for one well-lubricated person who afterwards shouted “play some blues”. Now it would appear he hadn’t noticed that’s what Eric and the band had been doing in their own inimitable way. He addressed the guy (after working out what he shouted) by remarking quite simply “I am Eric Gales and I play what I want to play” causing possibly the cheer of the night from the audience.

Eric pointed out that he isn’t “just” a blues player but he incorporates all of the styles that move him into what he does. He then started “Too Close To The Fire” playing it for about a minute and then stopped. Suddenly he blasted into a heavy blues guitar workout, his fingers on fire whilst he pulled faces and smiles. After a minute or so he stopped and went “I can play the blues” and straight back into “Too Close“.

The cheer that went up was telling, the majority understood and got him and what he is about. This was another track that live really took on a life of its own. If you thought it beautiful on the album, well this took it to new levels of elegance and beauty. His delivery was so intense and his pain and passion were palpable as he sang about the bigotry and hate he had seen in his life. Again it felt like he was questioning each and everyone of us to explore our attitudes. The sheer depth of this was something else.

Even More Versatility On Show

Eric closed of course with the title track from the new album “Crown” where he took the recorded version and juggled it around, allowing the keys to be the second guitar and in his own soloing threw in some country styled finger picking guitar, if only to prove he could whilst entertaining the crap out of the audience. He did say that he had to stop due to a club coming on and someone tried to convince him there wasn’t one afterwards to get him to play longer. Gales laughed saying “Its when I have been told to finish, I do what I am told” which seemed fair to most of us. He then asked folks to come over to the merch desk as he was heading straight over. Eric even said if we weren’t buying anything stop and say hello which was very cool indeed. 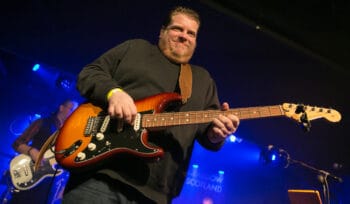 Support came from English-born blues guitarist Danny Bryant with his 3 piece band. He opened with an instrumental called “So Excited” which came out of the traps all guns blazing. It was heavy blues, really rocking in style. Hie first words of the night were simply “let’s do this” and that is what they did. He said that their job was to warm the crowd up, get them in the mood and boy it was obvious they were going to do that. They did a truncated version of “Bullfrog Blues” from Rory Gallagher which the crowd (ever-growing… first bands on so early suffer a little due to that) obviously dug big time. There was even a hint of old-style Quo with their in-your-face 12 bar boogie at one point in the set!

It wasn’t all just bombastic rocking blues as he can do subtle too as he showed on “Little Wing” where he showed some lovely touches and melody. Like Eric he is quite amiable and can have a laugh with the audience and is happy to throw in some deprecating humour, especially when he told the audience about his merch including supposedly his “work out and fitness video which is on Betamax ” so you “could have a body like this”. He then threw in a line about for “£10 you get the Betamax machine thrown in“. He certainly got the crowd up for the headline act and in his near 50 minute set won over plenty new fans. Very good performance all round.

Without a doubt this was a terrific night with the headliner Eric Gales proving to be an all-rounder as a writer, singer, guitarist and performer. He has charisma by the bucket load and he can go from serious and emotional to fun and rocking all in the same show. Having been lucky enough to see some of the biggest music performers through the last 40 years or more my own view is that he is one of the very best I have witnessed.

He really is that good. The band of course were top dogs too to back up all that talent and added to that was a great support act. A night that I will remember and talk about for a long time to come.

He is coming to the end of this leg of the UK tour with just Leeds Brundell Social Club on the third of April (He is heading back for a series of US dates Aril/May). However the good news is that the man and his band are returning for a group of UK gigs in June! Catch them on these dates and at these places: