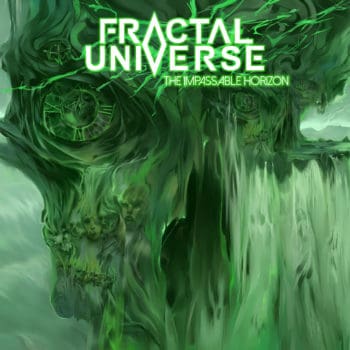 The Impassable Horizon is the second album by French metal band Fractal Universe. They are in the world of progressive rock/metal in the most part floating between some really heavy-hitting riffs and melodic beauty. The band are comprised of main man (he seems to be the main writer and arranger) Vince Wilquin who is responsible for vocals, guitar and saxophone, Hugo Florimond also on guitars, Valentin Pelletier on bass and finally Clement Denys on the drums. On a couple of tracks, Hugo provides some throat singing and also supplying some extra vocals is Leopoldine Marcoux who also happens to be Vince‘s girlfriend! The first bands I thought of on listening to this were Opeth, Ihsahn, Leprous (who are kind of the same band) and King Crimson. On repeated listening, I noticed quite a few more even hints of 60s era Fleetwood Mac. Having checked out their first album I will say this has a lot more clean vocals on it, additional subtlety and a tad more variety with some chances being taken. It is a concept album but don’t let that scare you. The press notes did plenty explaining and it went above my 4 O level school grades. I think the important line is “what does it mean for us to be aware of our own finiteness both consciously and subconsciously” which is based on a concept by German philosopher Martin Heidegger who talked about living in the world and in the moment (or something similar). As I said if you aren’t knee-deep in philosophical studies, you can focus on the music. That is 100% worth on I assure you.

Opener “Autopoiesis” (meaning “self-creation” as some life forms reproduce themselves with no other creature or being involved) is mostly a heavy track with growls, riffs and manic guitar work at times, but the short harmonized vocal parts had me noting down both Spock’s Beard and Gentle Giant. The song changes up a few times but never strays too long from something extreme metal-wise. Second song “A Clockwork Expectation” really caught my attention right away with its rather quirky moments and a very strong hook/chorus that appears at various junctions. Once again there are either harmonies or layered vocals in those moments. One of the things that I noticed throughout the album is the amount of space left in there. It really allows songs to breathe. Sometimes like in this it also makes the little heavier sections more effective as they sneak in almost unexpectedly and hit you in the gut. Very effective all round. This is one of the songs that feature the sax having a solo around the 4-minute mark.

Heavy With Feel And Emotion:

“Interfering Spherical Scenes” has a “chugga chugga” little riff at the start that has that “Eye Of The Tiger” vibe, albeit for only a few seconds before the guitar takes us in a classical direction, or at least neo-classical before it drops into a very quiet passage with just small tings of cymbals keeping a rhythm going. The mix of vocals are highlighted here as the gruff vocals are harsh and nasty yet the gentle are so lovely and melodic. Again the guitar solo here is based on feel and emotion, no fretboard wanking here. “Symmetrical Masquerade” is one of the jazzier songs here. Not all the way through of course but with that and whispered vocals this is an atmospheric piece. I do appreciate the little guitar riff going on in the background that are spaced out. Talking about allowing space in a song brings us to “Falls Of The Earth” where they utilize it very well. It has a reasonably heavy start but it soon drops down for a bit before becoming brutal again, however, Clement still has fun throwing in fills and rolls keeping the song fresh and interesting. One of my personal favourite tracks on the album. 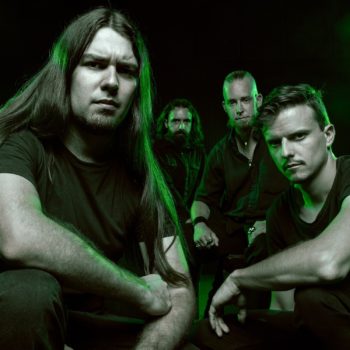 “Withering Snowdrops” has an almost symphonic metal start along with some spicy neo-classical guitar noodlings before the song kicks fully in. “Black Sails Of Melancholia” lives up to its name. Another track featuring sax, this is moody, sad and indeed melancholic. There are heavier, angrier-sounding moments of despair sneaking in at points but there is a feeling of trying to hold that anger in check despite the feelings of desperation. This has another very tasteful solo and an ending that brings the song full circle. “A Cosmological Arch” is the song which the drums reminded me a little of 60s Mac. The guitar is big and echoes before it drops down to a much more reflective song. Despite being heavy as a ton of bricks at points, I do like the jazz influences via the bass work of Valentin where he is accompanied by some deft cymbal work.

All That Is Good:

“Epitaph” is a fairly heavy track with mostly harsh vocals although there are some clean sitting behind those at moments. The way they cut from the gentle section into the metal again where they sneak it surreptitiously under the solo to take over is clever. The longest song on the album and the last new song (there is an acoustic version of an older track to finish) “Godless Machinists” takes all the elements that make up the album and give them a little more airing time, there are plenty of changes but all the parts have a little longer to breathe. From heavy drum fills, through clean and reflective vocals and music and onto I think the fastest and heaviest riff on the album, growls, vocal harmonies, guitar solo and some spoken word this has almost everything that is good on the album in an 8-minute blowout, (apart from a sax solo!) As stated the last song is a re-working of “Flashes Of Potentialities” as an unplugged song. It is quite similar, a little shorter in running length and the transposition from electric lead to acoustic is nicely done. Also interesting to hear the original guitar solo being turned into a saxophone one.

On The Road To Full Prog!

“The Impassable Horizon” is a step up from the first album (which in itself is a damn fine listen), however, it feels like they have grown and travelled along the road towards full prog. There is still plenty of heavy or extreme elements here but they are spaced out so they seem more effective and hit harder. I have found myself playing this quite a lot for my own pleasure and each time I am captivated. A really excellent album that is vying for certainly prog album of the year in my view (and probably top 10 in general). Anyone who likes progressive music and those who love heavy or extreme music and can handle an album where it is mixed with lots of melodies will dig it too. Highly recommended!