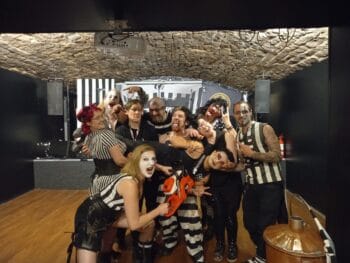 This is the follow-up to part 1 of an interview conducted with the band and crew of Ward XVI when they played at Bannerman’s Bar on Sunday May 8. The first part which covers such subjects as how the band were formed, the writing process, nearly destroying their house to make videos and putting Alice Cooper in a headlock can be found Here.

The second part was conducted in the room where they played their set on the night and everybody was there and most had things to say (even in the background). Time to find out about guitarist Doktor Von Stottenstein, more about where the lead character Psychoberrie originated, and should villains be made empathetic plus much more…

CGCM: Hi everybody, I’m back to ask some more stupid shit (everyone laughs and cheers), thank you for allowing me to keep going. First thing I would be interested to know about is the good Doktor. Is he a patient who thinks he is a doctor or one of the doctors in the institute?

Ward XVI: (One of the band shouts at Doktor “you haven’t been asked that before” whilst laughing waiting to see what the Dok would say)

Ward XVI (Doktor): “I think I am a doctor, I think perhaps my role will be greater explained on the third album.“

CGCM: Ah, a bit of a tease there for album 3. I will be waiting to see if you are explained.

Ward XVI: Dok: “At the moment it has been hinted at, (to which Psychberrie suggests “a rapist“, the band start laughing and taking the piss out of the poor Doktor who replies “Oh god it’s started again“). I think initially all the supporting characters like myself, Wolfy etc were not part of the storyline.

“We were dressed to the theme to play (the music). We don’t know if we are just part of 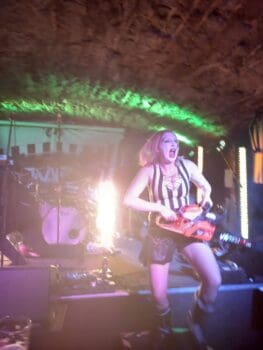 Psychoberrie‘s imagination, if we have a role in the story. Maybe it looks like I won’t have a role that’s very nice after all (everybody laughing). Need to be careful,don’t want to do something where I lose my job, or we won’t be able to play for all this (laughs all round).

“As for my name, like everybody’s it is character-driven, in my case, I actually work in the medical profession as a normal person and with that and the fact the whole thing is based on an asylum I called myself Doktor but I added the name part to the title due to my love of Helloween and off course their song “Dr Stein“. I kind of played around with that. So there was nothing premaditated story wise with the name. However the third album…..” (he stops and smiles).

CGCM: Maybe of course I am taking all this far too seriously trying to work stuff like that out.

Ward XVI: (Doktor): “That’s where the evolution comes in. At the beginning it wasn’t quite as serious. When we started to put the show together that affected our writing and engagement with it all. We started to get immersed in the story building. Now we are so focussed and serious about the concept. We are kind of having to catch up a bit with the fans. Due to that, I think our storytelling has improved.”

CGCM: The storytelling is great on the new album especially, I could visualise the characters. For me, it is like reading a damn good book.

Ward XVI: (Doktor): “Yeah, (looking over at Psychoberrie) she is an amazing lyricist, she constantly surprises me with some of her lyrics, she certainly inspires me. Man, she’s on a different level to the rest of us.”

Ward XVI: (Psychoberrie): It comes from being in a band before and how they kicked me out saying that I was a rubbish singer, which destroyed my confidence. When I came back many years later I auditioned for another band, I didn’t really want to be in it, they were alright, but I wanted to test and see if I really was rubbish.  After the audition, they were like “we would really kike you to join” which was great. However I apologised, and basically said “sorry I have to let you guys down but I really would like to do my own thing”. Even after that I still didn’t feel I could come back as me.” 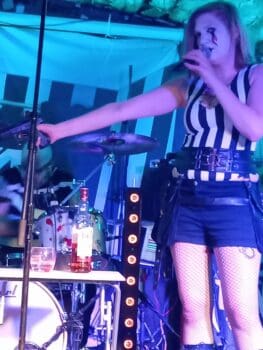 “I then thought about Alice Cooper and how he was a different character onstage. Also, I read something about Slash and how he put the hat on and moved his hair in front of his face as he was so nervous, so self-conscious. I decided not to come back as myself at that point but rather as an alter ego, you know put on my make-up and become someone more confident. I actually think we all do something like that to a degree at times.”

Ward XVI: (Doktor): “It’s kind of funny as I don’t feel right playing guitar without all this stupid stuff on. In my day job I can get over-stressed, if I could have my makeup on I think perhaps I would be more hard-faced about stuff.”

Ward XVI: (Rico (inmate/actor): “In this (the makeup) you aren’t really that mortal person, you create a heightened version. I’m a little bit strange (a few folks laugh at that possible bombshell) but not as strange as when I am onstage. It kind of pumps you up, gives an air of protection. I genuinely don’t think I could do the things I do onstage if I wasn’t in face paint”. (Bam Bam pipes up in the background “I’m still in the feeling like a twat stage” to much laughter. He then goes on to remark “I’ll forget I am wearing it, go to the toilet for a pee, suddenly see myself in the mirror and make myself fuckin’ jump”) causing even more laughter.

Ward XVI: (Doktor): “There are lots of bands in makeup that do the mystique better, I mean Slipknot didn’t show their faces for forever. (Someone in the band, I can’t work out which voice it is, remarks, “We are very approachable, we will talk to anybody and everybody, you know we are just normal folk” which leads to several of the band going “I’m Normal” in very silly voices.) The philosophy is that we are a pub band” says the Dok continuing on by saying “we always will be“.

One of the band/crew said that if they did ever play stadiums he would want to jump the barrier to have a “craich with the crowd“. This leads others to question his comment… “What you want to crap on the crew?” and “what, do crack with the crowd?”. Everybody is laughing and taking the piss out of each other. It stops when Psychoberrie tries to regain order by suggesting that we “go back to the original question” which was difficult as none of us could remember it! Cue lots of laughing at me as even I couldn’t remember and I asked it!

CGCM: On the new album Psychoberrie becomes a bit of an anti-hero, you know you start actually sympathising with her.

Ward XVI: (Psychoberrie): “That was the intention on the new album. On the first she is just “an evil killer, messed up, horrible” so we switched it around. Going back to the beginning makes you wonder would or could I do the same thing after going through all this. You start to empathise. That’s quite scary if you get to thinking “I could be that person if all that happened to me”.

CGCM: There were a few boos in the audience at the police taking Psychoberrie away. That kind of showed me the engagement between listener and character.

Ward XVI: (Psychoberrie): “It is definitely more immersive than the first album. You can see that in the faces of the people watching, they are glued to it.” 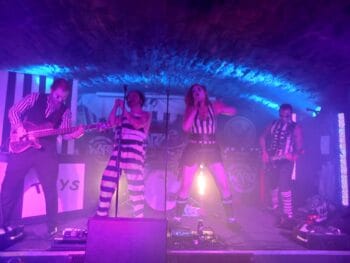 At this point, a conversion breaks out amongst everybody with one person suggesting that “the best villains are always the ones where you get them, not the moustached twirling man tying the maiden to the train tracks who you just think “he’s a baddie”.

Ward XVI: (Doktor): (takes over the subject with gusto): “Actually it is a difficult one that. For instance, what they did to Darth Vader in the prequels, it removed all the mystique of the character. I know this is all going a bit weird (laughs). When you started to empathise with him you for me, lose the magic. Coming back to the point, on this however, I think it was necessary for her to have reasons for why she is this way. I think on the first album it was almost a cartoon type, a hatchet killing criminal, a slasher, there was no consequence or motivation. I actually think that if you now go back to the first album you can hear it with a new understanding. Or at least that’s how I interpret it. I mean it’s all in (pointing at Psychoberrie) her head.“

At this point, an even bigger conversion starts up about various horror characters and villains and on occasion bloody awful adaptations of said characters.

CGCM:I am curious as to your views regarding one of the themes of the album, evil people or psychopaths, are they born like that or do circumstances make them? Anyone want to have a go at that? (Plenty laughing and looking at each other)

Ward XVI: Not sure who said this: “People are not made evil or are evil. People are animals. We have our main drives, food, shelter, and procreation. That is what drives any human I think.”

Ward XVI: (Psychoberrie): “I actually did a lot of research into the subject before properly starting the project. They say around 4% of the population are psychopaths. They don’t have certain human emotions however most don’t become serial killers, they will however often end up as manipulators.  The main common denominator in serial killers is having been abused as children whether sexually or physically.“

CGCM: I couldn’t be a serial killer. I can prove it. Whenever they catch one you always hear the neighbours being interviewed on TV going “he was such a quiet guy”, I never shut up so you are safe with me. (Lots of laughing… until one of the band ominously remarks “psychopaths will always tell you that you are safe“… to which there was even more laughter.

At this point, it was getting really late and the band still had to pack up their gear. It says much about them as people that they were willing to take so much time to talk to an interviewer, even if it meant they didn’t get packed up until late. On behalf of CGCMI wish to say thank you and wish the band all the very best for the future. We look forward to new material and further tours.