The debut album Original Sin Part I by Stone Cold Crows checks so many boxes for me. In addition to their riff-heavy approach, the Stone Cold Crows mix in orchestration, creating what’s essentially a score to their dystopian vision. It’s a concept album, and I believe the gist is a Mafia-like organization is subjugating a population. Between the orchestration, the subject matter, and the fact that it’s the first in a trilogy, you get the feeling that the creative duo of Mitch Cuming and Bryson Emmons might have come up with the idea while watching The Godfather.

Of course, that’s not the case. The real story is way better. If you didn’t follow the link, the short version is Cuming has been out of the music business since the demise of The Creekwater Junkies ten years ago — the band he and Emmons were in previously — and a health care brought him back to music. This story shows once again how wrong Gene Simmons is when he prattles on about”Rock is dead.” As an artist, you can’t simply stop creating because your works aren’t at the top of the fickle public’s interest. You create because you have to. Or, as Cuming‘s puts it: “The truth is… musicians don’t need to “make it” anymore in order to be successful, because “it” is whatever success means to you. And to me – “it” is being able to make the music I love and share it with the world. And so I will.”

If you check out Original Sin Part I, you’ll be pretty happy Cuming and Emmons are back together. 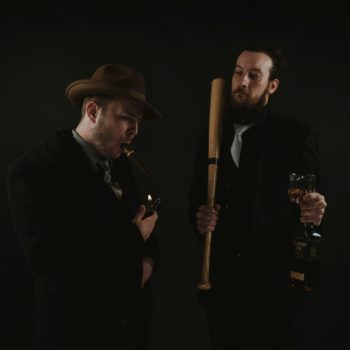 Stone Cold Crows have created a cinematic audio experience with Original Sin Part I.  Sometimes when rock bands include strings and horns, it can feel a bit disjointed. But on this release, the orchestration adds to the entire experience. As in movies, the score seasons the mood and emotion, cooling you off or hyping you up. That’s precisely how it works here. Each song uses orchestration to a greater or less degree, but always effectively. Here are a few highlights.

“Brave New 84” establishes the dystopian setting of the album, combining the literary influences in the title (“Brave New World” and “1984“). The song is extremely well layered and arranged. The rock riffs marry perfectly with the strings over an incessant, heavy drum track. 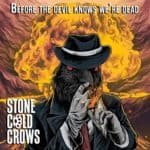 The first single, “Before The Devil Knows We’re Dead” was featured in the May 19th Beaver Buzz. At that time I wrote that it “weaves the score to a gangster movie with a heavy, blues rocker. The result is a refreshing combination that works well, especially when paired with the video.” As a part of the album, it’s even better.

“Ghost in a Bottle“, also a Beaver Buzz track from August is frenetic and fast-paced. The guitar work is stellar and the horns add energy. It also merges seamlessly into the following track, “The Beast I Am“. Again, the structure is extremely well done. I especially like the calming interlude that segues into the guitar solo.

There is no gimmick here. The hard rock and a film score approach absolutely can work. Original Sin Part I is dripping with big, meaty tracks that’ll get your attention. It’s definitely worth a sit-down with some good headphones. The world is a richer place with Mitch Cuming and Bryson Emmons back together making killer music.

You can find the Collective List as well as all our Best of 2022 content including contributors’ individual lists, podcasts and radio DJ shows here: CGCM’s Best of 2022 (Year in Review) BEST OF 2022 – Dave Wilks (Writer/Contributor) 🇺🇸 2022 was a beautiful year of rock and roll. This list covers the gamut from New Wave of Traditional Metal, […]