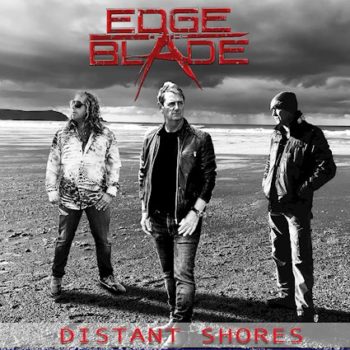 EDGE OF THE BLADE – Distant Shores

Edge of the Blade features on lead vocals former UK After Hours vocalist John Francis alongside Alan Kelly, former drummer of SHY and multi-instrumentalist with 7HY.
Bringing on board lead guitarist Miguel Angel Lopez they have teamed up once again to bring you yet more exciting new material which will see roots-based well and truly in AOR melodic rock.

They have previously released an album under the name of Edge of the Blade entitled The Ghosts Of Humans. This was on a British label in 2015 which was produced by Andrew Chick. The album saw the band venture into heavier territory with influences from Avenged Sevenfold and Alter Bridge.

Although this album was well received with rock fans and critics worldwide the calling back to AOR was very strong.

Their second album Feels Like Home, got released in 2017 on a Danish label, and saw a welcome return to their roots. It brought out the best in both John and Alan in a much more melodic genre that both have excelled in previously. They soared to new heights with influences from Journey and Foreigner that show their talents off to the fullest extent.