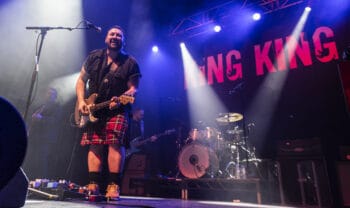 King King returned to their hometown of Glasgow as part of their delayed tour promoting their latest album Maverick. They were accompanied by Canadians The Damn Truth who were venturing to the UK for the first time.

King King‘s lineup is still made up of Alan Nimmo on vocals and lead guitar, his brother Stevie Nimmo on guitar and backing vocals along with keys man Jonny Dyke, bassist Zander Greenshields who also supply backing vocals and finally drummer  Andrew Scott.

The venue (which is different from the original one) was the O2 Academy which is a former cinema in an area called the “Gorbals” on the south side of the Clyde River which runs through the heart of Glasgow and which changed into a gig venue in the early 2000s. This is leg 2 and the setlist is roughly the same as before, but due to the band improvising on solos and the onstage banter from Alan it, as always, took on a life of its own. Each show is an event in which they happily include the audience, not only in general participation but in call-outs from members which Alan uses to add comedy/fun to the show.

Coming on to the sounds of “Highway To Hell” by AC/DC as always the crowd going with the band entering on during the first chorus and second verse. This allows Alan to get the crowd to belt out the chorus even louder the second time. They start playing as the piped-in AC/DC is playing, so there is a straight line into their opener “(She Don’t) Gimme No  Lovin’“, a Bad Company type blues rocker but with a pop feel and on this occasion no encouragement was needed to get the crowd clapping along and joining in on the chorus.

Looking at the band you can see the huge grins as they play, and on checking around me that was reciprocated by the crowd who were also smiling and having a blast. One of the great things about the band is that everyone (apart from the drummer) has a mike and joins in with the harmonies as we heard very nicely during several songs including “Fire In My Soul” where they bring it right down to just some sparing keys and their voices.

The band has a good mix of classic rock songs and longer blues tracks in their repertoire which allows plenty of crowd singalongs whilst allowing especially Alan and Jonny (and Stevie a couple of times) to show their skills in soloing. Two of the most popular crowd songs are “Waking Up” and “Rush Hour” with the latter having a moment that surprised in that Stevie did the lead solo.

Now it could have been due to a guitar issue for Alan who was at the back of the stage (I couldn’t quite see being short) possibly changing a string or something. Now if it was, the way that Stevie picked it up and ran with it so there wasn’t a break musically and we lost nothing sound-wise was brilliant. It says how good these guys are that they can fill in for each other at a second’s moment.

They are so damned tight and good as players and performers. As for the singalong part, the crowd absolutely nailed it (as always it seems) leading Alan to dedicate the following song “Coming Home (Rest Your Eyes)” to all of us who sang along so well! This is another song where Jonny‘s keys are so effective. The keys stayed at the forefront for “A Long History Of Love” and of course being a blues workout there was plenty of good soloing from the guys. If you watch closely you can see the smiles on the faces as they enjoy the improvisation going on between themselves and whenever someone takes the lead the rest of the band are encouraging them on with winks, nods, finger-pointing and smiles. You can see how the band work in a song like this and it is terrific to watch.

Best Vocal Harmonies Of The Night

“Whatever It Takes To Survive” has some delicious organ going on. The main melody line is so powerful and with the vocal harmonies, it has such an emotional tug to it. It is such an uplifting track with real beauty and if the world was fair it would be a massive hit all over the world if it was released as a single.  They follow that with a fun upbeat funky rocker “I Will Not Fail” which has some of the best background vocal harmonies of the night. The groove is such that there were people actually dancing around me!

The 3 song encore had a mix of all the ingredients that make the band what they are. First up “When My Winter Comes” is just Alan and Stevie harmonising with Jonny playing the organ. It is quite bare but utterly captivating. “Stranger To Love” is a lovely blues work out which made me think of early Rainbow, the way that Blackmore would play so soft and so quiet you had to pay close attention to hear all his touches and that is something Alan does at one point. It takes bravery and a certain amount of confidence to trust that the audience will stay hushed whilst you play and this is accomplished during the song. Finally, they play “Let Love In“, a funky upbeat blues song with a Bad Company style chorus that gets the crowd dancing and singing into the night.

Once again King King deliver live. They are utterly dependable in that they entertain an audience via not only great musicianship (and solos) but with quality songs, great choruses that just scream to be joined in with along with plenty of good self-deprecating humour that is warmly engaging. It isn’t put on, they are obviously down-to-earth guys who love what they do and want to deliver a great night each and every time. 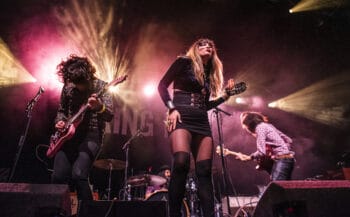 A Look At The Support

Support act The Damn Truth from Canada looked as every bit happy to be playing Glasgow and the UK as the headliner. Lead singer Lee-la Baum mentions several times how happy they are to have the chance to be playing outside of not only their homeland but right across the big pond in the UK.

The rest of the band comprises of guitarist Tom Shemer, bassist PY Letellier and drummer Dave Traina who all seem to supply backing vocals on the night from what I could tell. They describe themselves as “rock ‘n’ roll hippies” which is a good description, whilst one member of the audience described them as “Black Sabbath fronted by Grace Slick” which is also pretty accurate, at least in some songs. They move around the stage pretty well so visually they are good to watch and thankfully they have the songs and chops to back it all up.

Opening with the first song off their latest album Now Or Nowhere seems a good idea as is a statement of intent. The song “This Is Who We Are” has (like much of their set) a 60s vibe but rocks pretty bloody hard and heavy! Great energy from them. Lee-la on some songs does rhythm guitar but on others takes up either the tambourine or maracas which allows her to strut and dance across the stage a bit more. One of the things that caught attention was that bassist PY alternates between using a pick or his fingers on different songs. I think the bluesier tracks were mostly finger playing and the more pop/rock parts were with a plectrum. There were plenty of tracks that he got to shine including “Full On You“.

Highlights From The Set

The best songs for me on the night were “Too Late” which flipped between laid-back psychedelic and heavy funky rock including a section that speeded up where her vocals are outstanding. When she sings lines between the musical gaps the voice is very powerful indeed.

“Broken Blues” blew me away. With Tom opting for a flying V and Lee-la on maracas this is a tasty blues track with at one point a riff that had a 70s Deep Purple feel to it. The drums during the solo were excellent, they really added to the piece.

“Look Innocent” has a chorus that asks the lover not to “break my heart” and certainly not to “look so innocent” if or when they do. Like the headliners, these guys and girl have a fearlessness in dropping the music right down to dead space before Lee-la howls a pained note. Beautiful stuff. There are times she also reminds of Janis Joplin in her movement and delivery and occasionally when sounding anguished, but for the most part it is power and beauty. They closed with a bullish number “Tomorrow” which when I looked around definitely had the crowd onside. There were folks moving and clapping and even some joining in with the inspiring sounding chorus.

The band departed looking like they had a great time and the audience seemed to have been well and truly won over in the main. They certainly got the night going with great aplomb and warmed the crowd up for the headliners, which is a job well done.

Two bands in fine form who know how to work a crowd and fired everybody up on a Saturday night in Glasgow. Anyone who gets a chance to catch up with the tour ongoing I highly recommend it. A great night guaranteed.

Check out my other articles and reviews here, Tom.