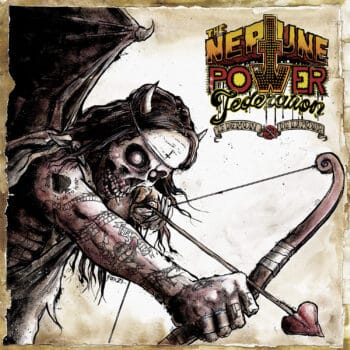 The Neptune Power Federation is a new name to me although they have 4 albums out previous to this and have been around since 2012 (when they released their first album “Mano A Satano“). This Australian band have names such as singer Screaming Loz Sutch, guitarists Search And Des Troy, Inverted Cruci Fox, bassist Jaytanic Ritual and finally drummer River Sticks. These give an idea that they are slightly occultish and have a sense of humour (which is correct in both parts).

Reading the press release the band declare that the album features “8 love songs ” and that they were doing this as “love songs have been commandeered by soft rockers, bedwetters and the introvert crowd” so they are putting love songs back into metal! They say about the songs that they are full of “infectious choruses and leaden riffs, easily reimagining rock and metal’s glory years but without the blatant thievery“. I admit the “blatant thievery” bit made me laugh.

What I will say is there are points where they have certainly taken from what came before but they managed each time to turn it around into something else before it becomes an actual copy of anything specific. The album was recorded at the bassist’s studios and the cover design was thought up by one of the guitarists (Inverted) so this is very much an in-house project. They call what they do “psychedelic rock ‘n’ roll” and in my view that is a pretty fair description.

The opener “Weeping On The Morn” is the longest track coming in at over 8 minutes and this allows them to experiment more. It comes in quite upbeat with an almost classical vibe with 2 drum beats at spaced points during the guitar motif. The guitar and also the use of vocal harmonies at times do hint at Queen especially around the 4 minute mark. The “oooohs” and “ahhhs” have a 60s feel. The first riff is definitely influenced by AC/DC but not for too long as this song chops and changes keeping the listener on their toes. There is a punky feel to certain points and it is great to hear plenty of bass lines and drum fills. Spacing is often overlooked these days but thankfully they have plenty of it. 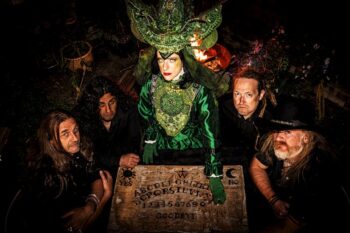 The Neptune Power Federation: The Band

There are as I said hints of quite a number of bands and even vocalists due to the way Loz utilises her voice. I noted names as varied as Hazel O’Connor and Grace Slick as she goes from manic wails to the ethereal and trippy. She sounds as mad as a box of chocolate frogs… and I mean that as a compliment… I love what she does.

“My Precious One” is one of the more straight ahead songs with a riff that made me think of Montrose. It is such a hard-driving riff. It moves at a speed. In it she appears to be putting out a call for a lover to return.

Talking about funk, “Baby You’re Mine” is full of it. With a great groove and a slightly disturbing chorus this is a huge amount of fun. That chorus goes “listen to my voice… look into my eyes, I’ll get you hynotized and baby you’re mine“. The solo is quite bluesy and there are plenty of little bass runs to savour. The mix of funky bass and psychedelic guitar and vocals is captivating and entertaining.

Jumping a little in the tracklisting I want to point out “Stay With Thee“. The reason is lyrically this could be a tie in with “Baby You’re Mine” and if it is, it makes me think you should avoid her eyes and voice as she appears to have the man captive in a cabin and he seems rather keen to leave! “Dearest will thy never go” she sings before adding that she said she would “never leave“, however, he has “denied their destiny and that that is why she whispered in his ear sweetly, “stay with thee”.

Her use of the word “sweetly” seems to be quite different to mine that is for sure! There is an air of menace about it. Musically it is in parts quite a faster paced heavy metal piece with moments of that 60s psychedelia mixed in. The speed up near the end is a tad like what Guns And Roses did on “Paradise City“. This grooves despite it’s heaviness and even punkiness (is that a word? If not then it should be).

“Loving You Is Killing Me” has a riff around the chorus that sounds like something from “Highway To Hell” era AC/DC, but it is used sparingly. There is also a very lovely little acoustic guitar part on this track which is a nice touch. There is a light air to the main guitar line which is in direct contrast to the seemingly dark lyrics.

“Emmaline” has an early 70s Black Sabbath feel/sound. That thing (particularly due to Bill Ward) is that Sabbath had a jazz or swing vibe going on in their doomy heaviness and that is similar here. It drops down to a dreamy trippy flower power vibe at one point about (appropriately) “golden flowers” before the riff kicks in again. As I mentioned earlier they are happy or comfortable with space and in this, they drop to almost nothing, just some bass and a haunting vocal and a strange guitar sound creeping in at points. “Madly In Love” has a childlike “na na na” chorus at the start.

The innocence of the vocals and background music seem almost at odds giving a sense of trepidation. When the riff kicks in there is an early Deep Purple vibe to it (again not “blatant thievery” just hinting), it is heavy psychedelic pop music but for this century. Loz delivers some of the lines like a mad priestess at points that seems rather fitting to what is going on.

They close out with a song that definitely takes from “Bat Out Of Hell” by Meatloaf, specifically, the song “You Took The Words Right Out Of My Mouth” in the sense they open with a question-answer section where even the “yes”‘s are delivered in the same breathy way.

The song itself is gentle 60s pop/rock and for the only time on the album features a male singer who is really good. They call and respond male and female and eventually harmonise the chorus. Halfway through it becomes more of a massive rock ballad, maybe not too far from the sort of thing done by Avantasia. It rocks, whilst also being very theatrical even allowing another childlike part vocally. Not the average ballad but one that has a sense of danger or being otherworldly.

This album absolutely entertains me every time I play it. Musically it harnesses many of the bands I grew up with and some of the styles that are not at the moment at the forefront of the rock and metal scene. Their clever way of mixing all the different parts and creating something old in style but still reasonably original, something that being honest is damned near impossible to do, is noteworthy and something I admire greatly.

There is much I like about this band and album including their use of space, the variety, the humour, the quality grooves and their sense of fun (unusual for an “occult” band). If these guys and girl can deliver this stuff half as well live as they do on record then I think a damn good night is guaranteed. Final words? Fabulous fun with no “blatant” thievery!

Check out my other articles and reviews here, Tom