FREAKS AND CLOWNS – We Set The World On Fire (Album Review) 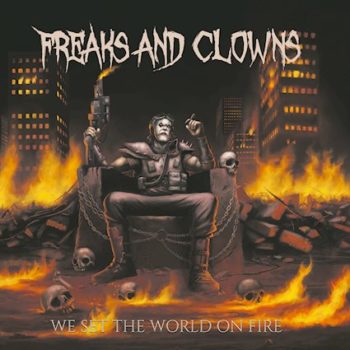 FREAKS AND CLOWNS – We Set The World On Fire

For A Bloody Good Time:

Freaks And Clowns are a Swedish metal band incorporating 3 members of Astral Doors. They formed in 2017 when AD‘s drummer Johan Lindstedt met singer Chrille Wahlgren and they found themselves bonding over old school classic metal. They decided to write and perform music in that style whilst adding some modern sounds as well. In trying to do so they realized they needed more musicians so Johan asked 2 of the guys in his regular band, firstly bassist Ulf Lagerstrom and then guitarist Mats Gesar to help out. They were then followed by a second guitarist in Mathias Henrysson. The first album came 2 years later in 2019 (self-titled) and the second a year after that. We Set The World On Fire is the latest release out Friday, January 28 on the Metalville label. Anyone who enjoys theatrical stuff like Alice Cooper or Lordi but likes it heavy like Accept will have a bloody good time. The songs all have massive choruses, easy to sing, and have plenty of energy to make folks want to punch the air and throw horns throughout. There are 13 songs in total with a run time of just over 50 minutes, as most songs are less than 5 mins long nothing drags at all.

Most of the tracks seem to have the title sung in the first lines of their respective songs. You can tell easily what they are called as they are straight in your face right from the kick-off. For instance opener “Am I A Freak Or Just A Monster” opens with that. Chrille sings the line and the band yells in unison “Monster“. This is a song to scream rather than sing (are as most of them) along with. I do like that the bass is high enough in the mix to be heard (one of my pet hates is not hearing the bass player). The lead vocals are in the vein of Udo ex of Accept whilst the harmonies are deeper allowing a little variety in sound. In a number of songs like the opener they can hit something with more groove (around the 2 and a half mark here) and they also drop things down for dramatic effect at points.

The album title comes next and it opens with sound effects. The vocals are a tad grittier here, especially at the start. The chorus has a delay for the word “tonight“, it has its own space so the crowd (I would imagine) can belt it out loudly. Metal but with still lots of melody. There are 2 songs that are about a woman, it could be about the same one in both, or he just has terrible taste, in general, going by the lyrics! “When Evils Got A Hold On You” has a gentler opening although when the drums kick in they do so bloody hard. The guitar lick is surprisingly quite jaunty and when the voice comes in he says he wants to tell us a story of a love he had. Apparently, she was “blonde and beautiful” however she had “fooled him from the start“. He continues that he was “blind to see what she did to me, she got me by the balls“, but on trying to escape her clutches he found she had taken his “heart and soul away“. We are encouraged to “scream” before the groovy chorus of “evil comes, evil goes” which should be easy to do live! The following “Hell Raising Woman” is pure AC/DC, even the vocal has a hint of Brian Johnson. The chant of “hell, hell hell raising” is the same sort of rebel-rousing that the Australian band mentioned do perfectly. Fun song!

“Dance Of The Dead” opens with a male voice asking “care for a dance?” before an evil-sounding laugh. This has such a good groove to it with some powerful drum rolls before the chorus kicks in. When they drop it down it allows the bass to come through more clearly. “Toxic” is another where the chorus is easy to join in with. Everything is around the drums at the start, it is the lead instrument with everything else filling in the spaces left. There are a few tempo changes and it is a damn good listen for that too. “The devil is real and he lives in me, I am the god of evil and you are my servant” he sings before telling us he/evil “never sleeps“. 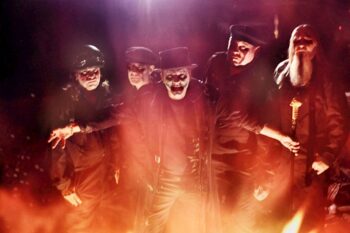 Freaks And Clowns: The Band

They do have a couple of tracks that slow things down a little. “One Last Ticket” opens with a heartbeat and a very melodic guitar line. It is a power ballad to all intent and purposes but it blends in with the themes they sing about. The chorus is upbeat, anthemic and even has a positive message and vibe. Album closer “Heaven’s Calling My Name” is not only the longest track but a great final song. Opening very gently with some classical style acoustic guitar work included this builds into another massive chorus. The refrain is strong and allows for more melodic guitar soloing. It did make me think of both the aforementioned Lordi and the governor of this style Alice Cooper at their most emotionally charged best but with that feeling of dread that it isn’t a “normal” ballad and that perhaps we should be more scared than relaxed! A classic lighters (now mobiles it seems) in the air sort of song done with great aplomb.

It ROCKS, What More Do We Need?:

This is a fine classic metal album, you can hear the influences loud and clear but who cares when the music is so well performed and the songs are so damned infectious? Lots of singalongs, moments to punch the air and/or headbang and it ROCKS, what’s not to enjoy? Many of the bands that are their major influences are getting a bit older so we need new ones to kick our collective arses at gigs and festivals. Freaks And Clowns are one that will do that.

Check out my other reviews and articles here, Tom