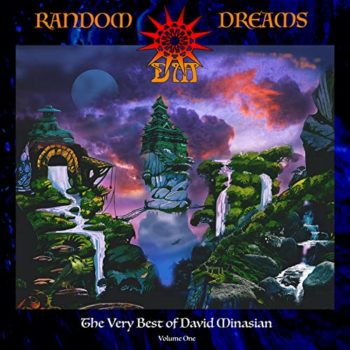 A Brief History Of David Minasian:

David Minasian has a strange but interesting back story in that he originally started classical piano at the age of 5 but by 15 had decided he wanted to work on films and documentaries. He did, however, in his work do soundtrack composing as well which probably explains the sort of music he makes and is quite heavily featured on this best-of compilation of his last 2 albums called David Minasian – Random Dreams: The Very Best  Of. Looking at the credits he plays a plethora of instruments, various keyboards, synths, mellotron, guitars, cello, violin, oboe and flute and a few others. Guesting on the albums are members or ex-members of bands such as The Moody Blues, Genesis, Renaissance, Camel, and later era Yes so there is plenty of talent on show between the tracks chosen for this compilation. According to what I learned about the man himself he was originally inspired to make the music he does by the Moody Blues. He made his first symphonic rock album back in 1984 called Tales Of Heroes And Lovers. He started working with Camel helping with their concert DVDs and is probably why the main man of Camel, Andy Latimer, guests on one of the tracks here playing guitar and doing at least some of the vocals. His son is also a big part of the more recent work and plays on tracks from the second album playing guitars, bass and some keys, so it seems talent must run in the family!

The first three songs on this are taken from his Random Acts Of Beauty from 2010. Opener “Masquerade” starts with a clash of cymbals leading into gentle piano and some sparse use of strings. Throughout it just oozes elegance… as well as mellotron! It has a definite soundtrack vibe to it and has hints of the bands previously mentioned along with early King Crimson and Pink Floyd in the vocals (in fact it reminded me in places a little of a Scottish band worth checking out called Preacher). Each instrument is clear, and the sound is exquisite. He and the band are not afraid to allow silence or very quiet moments within a song, which of course means that the louder sections of guitar soloing, and the drumming hit even harder. There is so much space, which is something a lot of modern progressive bands forget to include sadly. From there we head into something almost medieval in sound in “Storming The Castle“, think Rick Wakeman meeting Blackmore’s Night possibly in an alehouse! It is not without some heavier moments; in fact, it is almost a thinking person’s headbanger at points. Most of it could easily be in a film score for a movie about Robin Hood or something.

Up next is “Summer’s End”, from 2020’s Sound Of Dreams a gentle reflective vocal with piano underneath until it changes (like the seasons) with a gorgeous guitar refrain which soars taking the heart of the listener with it. The song fluctuates nicely, both melodically and stylistically. To put it simply the pacing is superb. When the flamenco-style guitar comes in it just adds such extra colour to the song. Did I mention how much I like the guitar lines in this? I did? Good as they deserve the mentions!

The fourth song “The Wind Of Heaven” features Justin Hayward on vocals. Starting rather suitably with wind sounds and a horse galloping (well there are lyrics about a “stallion running along the riverbed”) and within the main body of the track plenty flute, acoustic guitar and mellotron and sounds sumptuous. It is lilting, relaxing and in with the use of sparing but effective piano and along with a choir at the end, it is all beautifully mixed together. 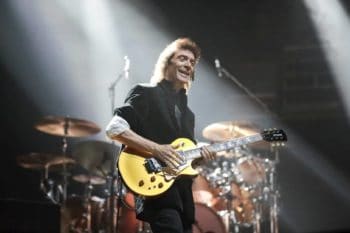 Staying with the 2020 opus the next track is a three-part suite. “The Sound Of Dreams” features both Annie Haslam of Renaissance on vocals along with Steve Hackett on guitar. The opening section is quite folky and sounds in modern terms a bit like some of the more genteel Ayreon music with Anneke van Giersbergen on vocals. It then heads into a more orchestral sound with long notes on the keys and by part 3 Mr. Hackett is in full flow guitar-wise. I also like the way the bass slowly but surely comes in making it rockier in the middle section. The thing with Steve is that he has such a distinctive sound yet is extremely versatile as a guitarist. All you need to do is sit back and just enjoy a master craftsman doing his thing.

“Room With Dark Corners” is one of the shorter tracks here and is a quirky folky piece, very easy on the ear. If you can imagine an AOR version of the aforementioned Blackmore’s Night then you would be in the ballpark. The song features Julie Ragins who is one of the regulars these days in The Moody Blues and has the sort of voice that would work very nicely on an Ayreon album.

The longest song is the last one of this remix compilation. “Twin Flames At Twilight” even manages to head into more metal territory in the middle of the track. It opens like a sweet classical piece, a bit baroque in style. There are some lovely flute sounds early doors but that may be via the mellotron. It has an epic vibe, sweeping and lovely, very cinematic. It takes 4 minutes for any voice to come in. After a couple of minutes, it changes into a heavy piece, fuzzy, thundering guitar riff mixed with great use of synths. It made me think of perhaps “Leviathan” era Mastodon. There are lots of drum fills, odd time signatures and frantic soloing in the middle section. It then twists back around via sweeping notes back into something mellower on acoustic guitar.

This is personally my first time getting to know David Minasian and I can honestly say I am now looking at getting the previous albums as I am mightily impressed by the scope and musicality of his work. With a stellar cast of talent surrounding him, this multi-instrumentalist writes and performs wonderful music that takes the listener back to the halcyon days of the 70s yet sounds fresh and exciting. If you want to get to know his work and what he is about this album is a fabulous intro to his world. Top-notch stuff!