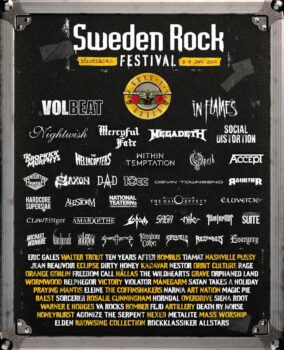 And with these additions, this year’s line-up is complete.

Saxon are perennial favourites with the SRF crowd. For good reason. These British heavy metal legends have maintained their great quality like few others during a 45-year career, both on stage and on record. Their new, 24th studio album Carpe Diem is no exception. Hopeless nostalgians who still claim that no Saxon music beats classics like “Wheels of Steel” and “Denim and Leather“, can obviously rest assured that Biff Byford and company will be performing those as well this summer. 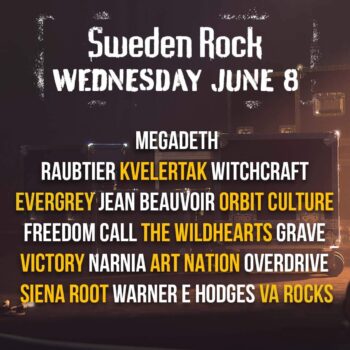 Nationalteatern (“The National Theater”) debuted in 1972 and have left an imprint on the very soul of Sweden itself like few other acts. Without a doubt because their sound is timeless and their message, although steeped in social commentary, works on numerous levels. Their 2022 tour goes under the name “Last chance!”, which fans should probably take as a hint to take this opportunity to experience the Nationalteatern classics one final time.

Guitarist Eric Gales is known as the prodigy who at the age of 16 released the eponymous debut by the Eric Gales Band in 1991. His powerful playing, inspired by Jimi Hendrix and classic blues, quickly made him one of the most lauded guitarists of his generation. Since then he has released another 16 studio albums, the three most recent of whom – Middle of the Road (2017), The Bookends (2019) and Crown (2022) – have definitely affirmed his position as one of the giants of modern blues. 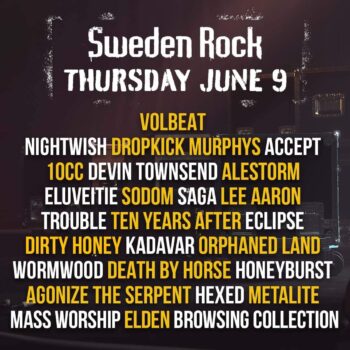 Dirty Honey from Los Angeles is a new, young band playing classic, raw hard rock’n’roll. Think Guns N’ Roses, Tesla and Aerosmith. Their 2019 debut EP produced the hit singles “When I’m Gone” and “Rolling 7s“. The Dirty Honey album arrived in 2021 to great media praise, and the band have done shows with the likes of The Who, the Black Crowes and Slash – the future looks bright for Dirty Honey.

Swedes Bomber play old school, up-tempo 80s metal, influenced by the likes of Iron Maiden, Thin Lizzy, Motörhead and Def Leppard. They are about to unleash their debut album Nocturnal Creatures, after having introduced themselves to Youtube audiences with video tracks like “Come Tomorrow” and “Zarathustra“. They have also proved to Swedish and German concertgoers that they sport an intense live show and a strong frontman in Anton Sköld. 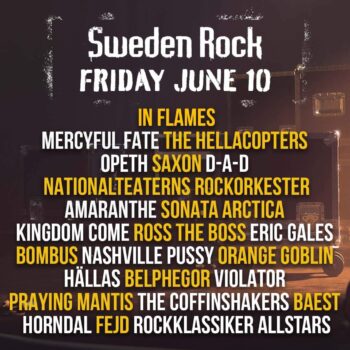 This SRF institution will obviously take part this year as well. A team of well-respected players from Sweden’s rock scene delighting the crowd with those classics we all know and love. In short, the perfect party soundtrack. The band’s lineup is, as you festival veterans know, rotating, and who will take part this time around will be announced later. But rest assured that they will be well-known players – and possibly there will be guest artists that are even more so.

As all 89 bands that make up the 2022 line-up are now presented, we are working on finishing the details of the running order. They will be posted on all our channels a bit closer to the festival. 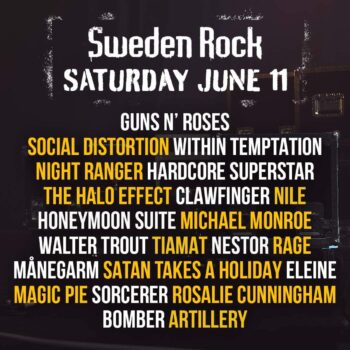 Read more about all the bands here: Sweden Rock Artists 2022