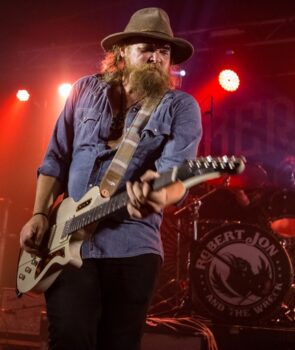 Robert Jon Live In Newcastle (Photo Thanks to Mick Burgess)

Up For A Damn Good Time?

The South Californian southern/blues rockers Robert Jon & The Wreck are touring the UK this May and on Friday 13 hit the city of Newcastle in a venue which is situated down on the waterfront and aptly called The Riverside which has 2 rooms. The venue they played had a very healthy crowd in and without a doubt were up for a damn good time. The band now comprised of mainman, vocalist and guitarist Robert Jon Burrison, Warren Murrel on bass/vocals, Henry James on lead guitar/vocals, Andrew Espartman on drums/vocals and on this night being joined once again with their usual and long term keyboard player Steve Maggiora who had missed the start of the tour as he was still working with Toto in the US.

There was no doubt that Robert was happy to see his friend and “brother” as he called him back in the fold. This was personally my first time catching the band live after naming Shine A Light On Me Brother as my album of the year 2021.  I described the music on that album as “wonderful, uplifting and joyous” and said that the rumour was they were fabulous live. I traveled down the 100 miles or so by bus, staying overnight in a cheap hostel in my eagerness to see them with very high hopes of something uplifting.

They opened the show with the first song of their 2015 album Glory Bound that being “The Devil Is Your Only Friend” which kicked things off with that groovy Southern rock and roll that they do so well. Right from the off the grins are on faces both on and off stage. People are moving in the crowd and simply put, music to move to. “Do You Remember” taken from their 2020 Last Light On The Highway (they did move around the albums a bit which is always cool) has that Allman Brothers Band dual guitar harmonies, clean and beautiful sounding.

They do drop into that style from time to time in songs. That was where I first noticed the dancing of bassist Warren who reminded me a little of Scott Thunes of Frank Zappa fame with his shades on, his shirt and erractic moves which were a huge amount of fun to watch. Guitarist Henry James showed his shredding ability on this whilst the rhythm section nailed down the groove constantly.

By the time they got onto “Hey, Hey Mama” from 2016 Good Life Pie, keys player Steve was also dancing along with Warren. In fact every time I looked at the pair of them at that side of the stage they seemed to be having their own party. That vibe was infectious to one and all.

A Worshipper At The Soul Church

“Everyday” from that latest album in 2021 turned into the first major jam of the night. It started all jazz-influenced riffage where the audience were encouraged to get those hands in the air and clap along. They kept the opening riff going a tad longer than on the album to allow the crowd to get fully involved. When they dropped the whole thing down primarily to harmonised vocals and clapping it did make me feel like I was in a very cool gospel church (I speak as an atheist) where the music is 100% soulful and upbeat. It is very hard not to get caught up in it all.

Plenty of soloing on this whether guitar or keys and all of it uplifting. I was personally loving the show and the people around me were too, but the only thing that seemed wrong was that Robert‘svocals were not so high in the mix. The singing sounded great but at times it was not so easy to hear him solo. However thankfully at the start of “Oh Miss Carolina” someone noticed and turned up his microphone and suddenly he was as clear as a bell. This was what folks in music would call a “crowd pleaser”. The noise levels around me shot up and folks were grooving and swaying everywhere I looked. The crowd’s singing was noticed as before the next song Steve made mention of it saying how loud it was.

The next song was the superb singalong “Tired Of Drinking Alone” which has such a strong melody and delightful slide guitar work. Southern country gospel with plenty of soul and as anthemic as anything that ever gets radio airplay. I think the crowd belted this out even better than anything before it. Drummer Andrew remarked at the end that we had “sang the shit out the last 3 songs” and that even behind the kit he could hear us.

“Desert Son” saw Robert on acoustic guitar. This is the sort of song that Skynyrd wrote to great effect (think of some of the songs on “Nuthin Fancy” in particular). The keys added so much texture to this song. A good old fashioned Southern ballad. From looking around and listening the singing in the crowd was still going strong. They are a band that knows melody, how to construct a quality easy on the ear song but can jam out with the best of them when the mood takes them.

“The Death Of Me” features Steve on keys quite heavily. The opening has a church organ vibe about it, which I suppose suits the lyrics! I loved the comment that Robert made about Steve and his playing style with the band (and possibly a mantra in general musically) “it’s not the notes you play, it’s the way you feel them“. It was one of those moments to just chill and watch the band play, as they jam things out, the solos just pouring out emotion and feel. Instruments are made to sing melodies and they do.

So There Is A Reason To Wear Shades Onstage?

They introduce us to a brand new song on the night (and this tour) in “Waiting For Your Man” with Robert explaining that the album is available at the moment but only from the merchandise desk. He also pointed out that despite playing the song on the new record this would be the very first time Steve on the keys will play it live. Bassist Warren then joked that the only reason he is wearing shades is to avoid all the “confused stares of the band attempting to play it“.

There was no need to worry as it seemed Steve had remembered it OK. The track was one of those easy on the ear catchy songs that they can write which definitely had a nice hard rocking vibe. They then played the only track of the night from their self titled 2018 album “Old Friend” which lyrically is quite sarcastic and utilises the keys and some lovely slide guitar to create a cool vibe which when I looked around had folks swaying (strangely saw a few couples dancing together, possibly they were oblivious to it not really being a romantic song, or just the groove took them over, who knows?) and dancing.

“Rollin‘” was another jam session with guitar solos, keyboard solos all the while the bass and drums lock the whole groove down tighter than a gnat’s arsehole. It was funny when folks booed the idea of them playing their “last song“, Robert suggested if we wanted more we could all come along and see them again the next night.

He then realised he wasn’t sure where they were going next. After a band member (I didn’t catch which one) said “Liverpool” Robert went on to say “it’s only an hour away from here“. When the crowd responded he admitted he had no idea if it was “an hour or 5 hours“. When someone in the audience says it is about 4 hours away he laughed and said “ain’t that far then“. I suppose being American that distance seems not a lot whereas in the UK it could be almost on another planet!

After a short break where the crowd clapped hands and stomped feet they came back on and played “Cold Night” which featured more of those delightful Allman Bros harmonies. The solo from Henry got pretty damned heavy at one point, but he was able to bring it back into the groove the band were playing. 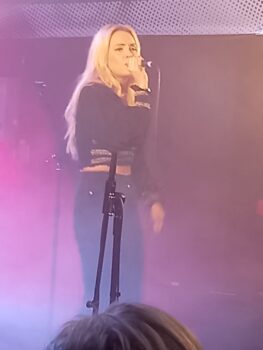 Support on the night came from Welsh singer-songwriter Laura Evans who just had a guitarist with her to do a few songs that were recent singles and to give us an insight into the album she is working on. Joe Coombs on guitar did a great job between acoustic and electric on the night. Some of his playing impressing Laura herself as well as many in the audience.

Laura is perhaps more country music in sound, so possibly had to work extra hard to win over some of the audience who were more hard rock fans. There is no doubt she is a very good singer and at times could be quite husky and alluring, whilst still being able to show a fine range. One or two songs were quite bluesy (the guitar really highlighted that) and she went down pretty well with a good portion of the audience. For me the best songs were “Solo” which is a bluesy /country/pop song that is very infectious. “State Of Mind” had some lovely interplay between singer and guitarist and the last song of the set “Alright” even got some of the crowd singing along.

Final Thoughts And Hitting My Expectations

I am so glad I made my way to Newcastle to catch this show. Robert Jon & The Wreck did what I spoke about in my album of the year comments here at CGCMwhen I wrote “They truly lift the soul to another more groovy level where there is brotherhood and love” as well as “It is good time music, uplifting throughout. Even the mellow tracks or ballads inspire positive vibes”. It would be impossible to come out of one of their gigs without feeling better all round. Bloody great job!

The tour continues and you can still catch the band in Sittingbourne (Monday 16 May); Manchester (Tuesday 17 May); Glasgow (Wednesday 18 May): Leeds (19 May) and Southampton (Friday 20 May).

Link for tickets for all UK dates can be found HERE