Turborider, the fifth album from the Finnish rockers Reckless Love, on AFM Records will be hitting the shelves and into the hands of the hungry fans on February 25th.  Being the first new album since 2016’s InVader fans are wondering what to expect. They did release a single called “Loaded” back in 2020 with an ABBA feel that left a lot of fans wondering the direction of the band.

This is probably the most “on the fence” album I have ever reviewed for the CGCM. Some mighty call this a rocking Pop album. Yes, it’s full of synthesizers, drum pads, keys, and voice effects. However, it rocks, and rocks hard in other places… but more on that later. To cast my vote, I would say it’s a perfect blend of both. I have been and still am a fan of a lot of those pop hits of the 80s’. I truly believe that most folks that like Hard Rock and Heavy Metal are also, but it’s a shameful secret! You better hide those Abba and Tiffany albums under the mattress in case your friends see it right?

Regardless of how anyone feels about Pop music, we are here to discuss the new Reckless Love album Turborider.  I was quite looking forward to this album. Being a fan of all their earlier releases, and even the singles that they have dropped in the last few years, I wanted more. Finally, it came across my desk for review consideration. I literally dropped everything I was doing and put it on. I was like a kid on Christmas morning, and I wasn’t disappointed. 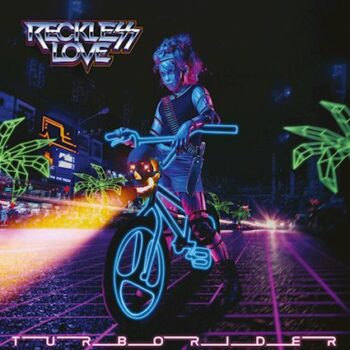 The title track opens it up and yes, we got some synth, and the drum pads are unmistakable, but the keyboard opening, followed by the hard-hitting drum hits are glorious, and then being followed by the electric robotic intro voice with a scream… I was in, and in all the way. I flashed back to the 80s’ when rock was fun, exciting, and a lot less preachy. Already hearing the singles of “Eyes Of A Maniac” and “Outrun” I enjoyed them and awaited the new music.

Barking at a Different Moon

“Kids Of the Arcade” tells a story that I am all too familiar with from my own youth and carries with it a great message as well (without being preachy as previously mentioned). The big shocker to me was the next track. Not expecting it, I honestly thought I had picked another album by mistake or hit the button in error. A cover tune of “Bark At The Moon”. Yes, the infamous Ozzy Osbourne hit is covered in all its glory with killer guitars and electric drum pad rolls. Having had to be heard to be believed, I can say this…It’s already gotten about 20 plays in the last week!

Speaking of killer guitars, the next two tracks won’t disappoint any fans of the six-string. “Prelude (Flight Of The Cobra)” is an intro instrumental piece, and (if listening on headphones) will travel from ear to ear into the song “Like A Cobra”. This might be a lighter track on the album vocally and drum-wise, but the guitar solo rocks! 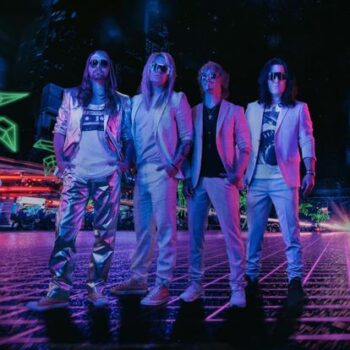 It may keep coming up about the 80s’ here, and don’t let that deter you. This album is a lot of fun, and isn’t that what rock is about? You can picture white Miami suits, Mirrored Ray Bands, spray-on tans, and neon signs white listening, and I am positive that you will be grinning ear to ear. No more does that feeling come across than in the song “’89 Sparkle”. Probably, the most “pop” sounding on the album, but still fits. The album rounds out with the tracks “Future Lover Boy”, and “Prodigal Son”.

All in all, this album leaves you smiling and remembering better times. Reckless Love has transported me back to pre-pandemic, pre-adulthood, pre-responsibility days, and for me, that’s always a great escape. If you want to just have 36 minutes of escapism, go for a ride with the Turborider.

Keep Rocking, and Enjoy The Ride!