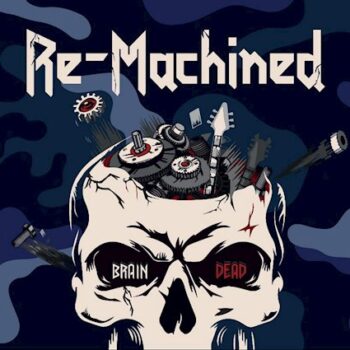 So back in 2020, I checked out an album called Wheels of Time from the band Re-Machined. I was pleasantly surprised with the solid balls-out hard rock. TBH, given more spins, this probably would have placed in my Top Ten of the year list that year.

The group in question hails from Hessia, Germany. Their debut, the aforementioned Wheels Of Time surfaced in 2020. And Brain Dead is their sophomore effort arriving via Pride & Joy Music on February 18, 2022. The Re-Machined sound is characterized by the heavy twin guitar riffs of Horst Pflaumer and Andreas Glanz coupled with the thundering rhythm section of Bruno Strasser (bass) and Volker Brecher (drums). Overlaid on all this excellent musicianship comes the piercing wail-ish screams of vocalist Thomas Ritter.

Markus Teske (The New Roses, U.D.O.) again produces the record as he did the debut.

First greeted by the sounds of a thunder peel and rainfall, leading to a beginning musical intro. Before long, a piercing wail of a scream attacks the ears. The chunky riffs are thick and heavy and plentiful. I love this style of track the pounding rhythm coupled with the chugging heaviness of the riffs pushes the track along inciting toe-tapping and head-nodding before we’re two minutes into the album! Also included here are piercing distinctive vocals, and tasteful song-fitting guitar soloing. The lead track is titled “Raise Some Hell” and is a good showcase for what’s to come. And it’s freaking awesome!

Clearly audible thumping basslines in track #3, “Demons” during this slower-paced yet no less heavy composition. “Standing On The Edge” (track #5) comes in a little more melodic and exhibits a smooth radio-friendly feeling that just screams Saxon to me!

“Stand Up and Fight” return us to the UDO-ish gravelly harshness in vocal. This one has another great chorus that should do well shouted back to the band in a live setting. The drums thunder the beat along and there’s no shortage of riffs and delicious solos as well in here.

Near the end of the collection and laced with obscenities and curse words, “Because I Hate You” oozes venom and outright bitterness directed at who I would think is an ex-girlfriend. Closing out the eleven booming tracks we find “Fist In Your Face” exhibiting an infectious groove complete with rolling bassline, more chug-along riffs and a shoutable fist in the air chorus.

I love a fast-moving album, inciting fist-pumping, air drumming and literally brimming with energy! The sort that leaves you gasping for air after the listen. That’s what Re-Machined‘s Brain Dead is all about for me! Early to say, but this sucker will be in play a long time and certainly has to be a best of year contender.