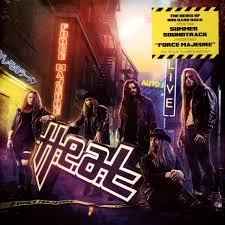 The wait is over! H.E.A.T are back with their 7th studio album and as the song suggests they are “Back to the Rhythm”!  2020 saw a change in the band lineup.  Kenny Leckremo has returned as lead singer, after a 10-year hiatus. Erik Gronwall handed the mic to Kenny in October 2020.   As we were all on a forced pause due to Covid 19, H.E.A.T hit the studio to write and record the appropriately named, Force Majeure. Merriam-webster.com defines Force Majeure as “Superior or irresistible force” which surely applies to H.E.A.T or “an event or effect that cannot be reasonably anticipated or controlled” yeah, Covid.

Once restrictions lifted and life got back to “normal”, H.E.A.T were able to tour again.  I was lucky enough to see Kenny sing on Monsters of Rock Cruise in February 2022.  They were his first two shows back with the band and his range and energy were very impressive.  I knew that whatever came next was going to be incredible.

The wait wasn’t too long to have my suspicions confirmed.  On March 25, 2022, the powerful anthem “Nationwide” was released and we had a date and title for the new album!  “Nationwide” is melodic and infectious.  It grabs you right away and has you singing along.  It sounds like…H.E.A.T!  “Nationwide” was quickly followed by the single “Back To The Rhythm” on April 8, 2022, another catchy-as-hell anthem.  These first two releases, to me, evoked the feeling of it’s time to move on, come together and start living life again.  I love how uplifting they are. Right now this is exactly what I need from my music.

“Hollywood” was released next on June, 10th 2022, it is one of my favourites on Force Majeure (at least today, my mind changes often) it’s a cool song with a fun video about how some people idolize Hollywood.  The video ties into “Back to the Rhythm” video bringing us back to H.E.A.T City.

August 5, 2022, was album release day and my beautiful violet vinyl arrived right on schedule.  Of course, I had already listened to the whole thing on Spotify at midnight, but it is still nice to have such a gorgeous physical copy.

Listening to the whole album made me realize just how much the whole band SHINES all the way through.  There are no “skippers” through the 11 songs, but there are some that you may have to repeat several times before moving on, they are just that good.

“Tainted Blood” this song has it all.  Heavy rhythm, killer guitar solo, great lyrics to chant to “Force! Force! Force!” and even a trill from Kenny!  What more could you ask for?

“Paramount” I love this song.  It sticks out on the album because it opens with this superb marching beat that catches your attention and carries you through the anthem.  It’s fun to belt out when I’m performing my own H.E.A.T concert in my car.

“Hold Your Fire” Dave Dalone’s stellar guitar work is heard on every song on this album, but the lively licks and cool guitar overlap during the intro make this song one of my go-to’s for an instant pick-me-up.

And of course, there’s “Hollywood“, see above.

I hear some Motley Crue and Def Leppard influences on some songs (maybe because I just saw The Stadium Tour) and definitely hear a mega nod to Iron Maiden in the heavier “Demon Eyes”!  However, just because you can hear influences, doesn’t mean that Force Majeure is a cheesy 80’s throwback album.  It is far from that!  H.E.A.T are 100% their own band with their own powerful sound.

I’m most impressed with the variety.  Every song sounds different.  From uplifting anthems like “Back to the Rhythm” to a hauntingly beautiful ballad “One of Us”, each song is a gem that showcases the band’s incredible talent.  It proves they are a major force to be reckoned with!

Pick this one up and crank it!