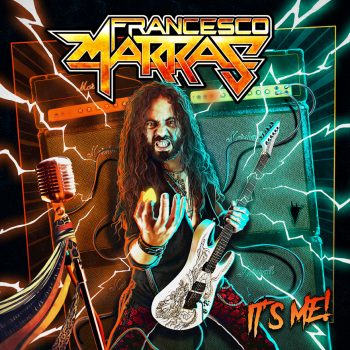 I have never heard of Francesco Marras before. So when I started to review It’s Me I thought I would approach this a bit differently. Normally when doing a review I head on over to Google and start searching and reading up on the band or artist, this time I thought would listen first then go and read up on him. So I got my headphones on and pressed play.

“Money Talks” started off with a nice riff and then I heard the Hammond organ. I really love the sound of the Hammond organ in rock and metal. The chorus is pretty catchy and I love how the organ and guitar play off each other at the beginning of the guitar solo. Good song to start the album off.

“Take My Hand” is next and the guitar work really stands out I can tell this album is going to have lots of great guitar work and a nice blend with keyboards. I love it when the keyboards are not front and center but placed nicely in the mix and this album so far seems to have that perfect blend.

The next three songs all fit the same style as the first two, great guitar work nice blend of keyboards and catchy choruses. So far this is a pretty good release. I’m really enjoying it.

“Lady Of Ice” is next, it’s the first ballad of the album. I’m not a fan of ballads. This song is ok the guitar is good in it. I understand why bands do the ballads but I just personally can’t get into them.

The pace picks back up with the next song. In the name of rock and roll has a chugging beat and again the great mix of Hammond. There is a nice Bass break right before the blistering guitar solo. “Do You Hear Me Now” is next and is a slower paced song not a ballad but a nice tune with great feeling to it. “Embrace the Silence” again highlights the great guitar and Hammond organ work on the album. The album closes off with another slower paced song “Closer To The Edge”, it reminds me of a Ron Keel song in some parts.

Overall this is a solid Hard rock release. It has nice clean production and you can really enjoy the guitar and Hammond organ well at least I did. I will be giving this multiple listens for sure. Now on to what I found out about Francesco Marras. First off is that he is a man of many talents. He did all the vocals, guitars, bass, banjo and drums programming on this album. That’s really impressive he did a great job on this. Here is some more info from his press release.

Since 2020 he is the guitarist of the English band Tygers of Pan Tang  with whom he released in 2022 (for the Danish label Mighty Music) an EP entitled “A New Heartbeat”, which anticipates the new album of the band currently in production.

The new solo album by Francesco Marras – “It’s me!” , will be released on September 15, 2022 for the Hard Rock /Metal record label Hell Tour Productions.

It will be available on major digital download platforms (iTunes, Spotify, YouTube Music, Deezer, Amazon mp3, etc.) and can be ordered in CD format from the artist’s official website

Lyrics and music by Francesco Marras

Find out more about Francesco Marras – “It’s me!”: