May 30, 2022Written by Trevor "Psychoone" McDougall
Leave a Comment 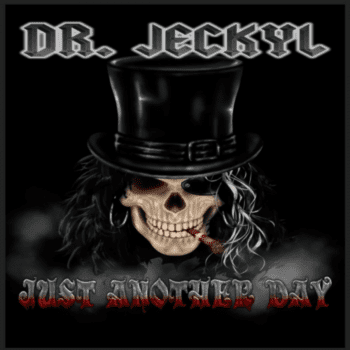 Dr. Jeckyl is an old-school-sounding metal band from Rochester, New York, that has been around for quite a while, just under other names. To be completely honest this band has been rocking together (sort of) since 1979. Back then they were known as Rage.

This lineup lasted for about two years and that was about it for them… until a long 39 years later when they reformed and called themselves Rage 5.0. Like many bands, they went through a lot of lineup changes for numerous reasons until they finally got the lineup that worked. The band, since it was going through all those changes, decided to again change the name, and work on a new album…Dr. Jeckyl was born, and Just Another Day started to form.

Most of the time here at the CGCM, we review brand new, or upcoming albums. This one we might say is a little late coming into my life. Released around March (so not that late I guess), but again it did take a while to even get this album together due to issues of Covid, and how the whole pandemic affected the music scene. However, at the beginning of 2022, Dr. Jeckyl finally got the album together and Just Another Day, got to see the light of day. To say that it was worth the wait is an understatement! Of course, it was worth the wait!

Kicking off things you get a vibe of a horror movie. Footsteps along a stone road, and the sound of a children’s music box eerily plays along until the hit of the guitars and drums come slamming in. That old-school metal riff kicks in and the drums follow suit giving the leadoff track of “Hatchetman” a distinct honour of setting the pace of Just Another Day. I love the vocals on this track. They give that vibe of the great metal classics from back in the day. The evil laughter included in the lyrics does add to the feel of the track.

Let Me Be is the next song, and immediately gives me a feeling of that signature Judas Priest guitar sound, showing the influences of the band quite openly, and I for one am loving each moment of it.

The album’s title track, “Just Another Day” comes up now, and again that twin axe attack carries through, with a terrific solo as well. The fills and rolls from the drummer also shine through on this track. Three songs in and so far, it’s all killer, and NO filler!

I keep mentioning things about the riffs, the twin guitars etc. but I haven’t talked too much 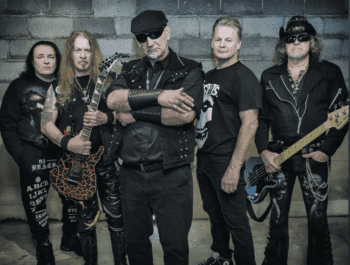 about the band. Let us get that rectified right now. First off, let’s start centre stage, the frontman of the band and the voice of Dr. Jeckyl, only known as… Ron. Finding info on the band is sparse, to be honest. Maybe they like the anonymity of it? I cannot say, but there is more to this band other than just the singer! On guitars, we have Lou and Ty. On the bass is Dave, and lastly on the thunderous skins is Kevin. This is the first time that this reviewer has seen just first names on the website, but hey who cares right? 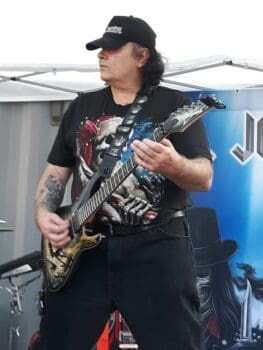 “Drag Pipes” is another track that has that guitar and drum sound of that old-school heavy metal sound we all fell in love with as a youth. Nothing wrong with this track in any way at all. The only thing I can say is that as great as the riffs, and solos are for some reason this one seems to chug along at one pace.

After this one is “Black Hole”. Seems that whoever we heard walking at the start of the album has reached their destination, and now we hear him opening and closing an old fashion door. This song is very vocally driven to my ears. The guitars, bass, and drums seem to take a step back a bit until around the 2 min mark, where we get treated to a fantastic solo on the guitar which lasts for about a whole minute before rejoining the band.

This next track I thought had a spelling error on it. That was until I looked it up online to make sure. The song is “Potectors”, which I thought should have been “Protectors”. Maybe it’s a New York slang thing, I don’t know, but I’ll go with it regardless. It’s still a good song. Up next in the set is “Mean Streaks”. Being very guitar-driven, this track could very well place as one of my personal favs on the album. 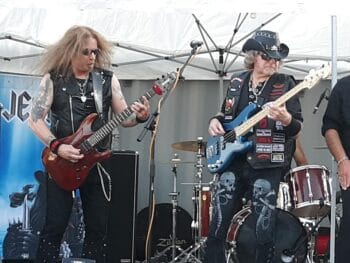 Closing in the home stretch of the eleven tracks on Just Another Day we have four more rocking tracks to dive in. “I’m America” is hard and heavy to begin. The vocals here bring to mind Volbeat in certain spots. With Americana soundbites like MLK, and JKF sprinkled throughout, not to mention using the Pledge of Allegiance as part of the song, you know the guys from Dr. Jeckyl are proud of the Red, White and Blue!

What would Dr. Jeckyl be without ‘Hyde’ right? This track is simply titled “Hyde” and again brings in that eerie music box sound, but this time it’s a little girl’s voice giving a grim warning to whatever it is she is speaking to. Evil laughter, wicked sounding beats and riffs are our companions in this song. Even the vocals have a surreal feeling to them. I am loving the atmosphere coming from this song. 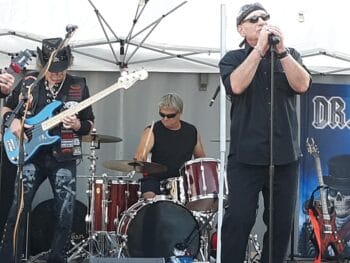 The last two songs, each just a second or so over the five-minute mark bring the debut album from Dr. Jeckyl to a close. What would a metal album be without a tribute to the elixir of the genre? “10 Scotch Mama” is a song to do just that. Probably the most “Hard Rock” sounding song on the album, it’s got some great solos and beats to keep then the most loyal metalheads happy. Closing things out is “War Drums” as you could probably guess by the title, this one is another cruncher that gets right in your face.

The debut album from Dr.Jeckyl, Just Another Day proves a couple of things. One, that old-school metal is not going anywhere, anytime soon. The second is that even after 39 years, you’re never too old to rock, and rock just as good as the metal gods we all know and love. So if you are an old-school metalhead, and want to try something new, be sure to check out Dr. Jeckyl.  Tell them CGCM sent ya!