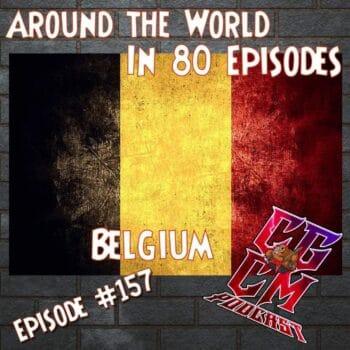 Pack your bags people we are going on a little trip. On this “Around the World in 80 Episodes”, the Candian Geeks are off to Belgium.

They are in search of waffles, yummy beer and mort importantly some great hard rock and heavy metal music.

In case this is your first Around The World In 80 Episodes, let me explain. This was one of the original ideas and possibly the only good one that was discussed when the Canadian Geeks started discussing having their own podcast.

The concept was really quite simple. They would select a country to focus on and then go out and find some quality hard rock and metal bands that call that country home. It quickly became a favourite with both the listeners but also the hosts. Every episode seems to uncover some very cool music. Bands that we likely never would have found had we not gone hunting.

The other fun part of these episodes have been uncovering some facts regarding the country that we are focusing on. Not just the boring stuff we leaned in school but deep, interesting and important facts. Facts like “In the 70’s Belgium used to serve beer to children in schools”. Now that would have made recess way more fun!

For those that might be keeping score, let’s recap the travels of Around the World in 80 Episodes. Thus far we have been to Canada, the UK, Switzerland, Brazil, Japan, Australia, Germany, China, USA parts 1 and 2, Sweden Parts 1 and 2, Italy, Finland, Chile and now we can add Belgium to the list.

The CGCM Podcast and CGCM Rock Radio are brought to you by our amazing sponsors. Iron Maiden Beer Canada, Writers and Rockers Coffee Company, The Farm Rehearsal Studios, Monarch Designs and The Rockpile Bar and Night Club.

You can find the Collective List as well as all our Best of 2022 content including contributors’ individual lists, podcasts and radio DJ shows here: CGCM’s Best of 2022 (Year in Review) BEST OF 2022 – Wallygator (DJ/Co-Creator) 🇨🇦 Another year older and questionably wiser. Twenty Twenty Two is basically in the books and that means the annual CGCM Top […]