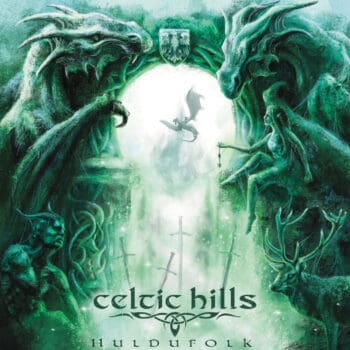 Celtic Hills is a power/melodic/thrash metal band from Italy.  Active since 2008, currently their label is Elevate Records.

It is powerful, melodic, and full of remarkable musicianship.  Many of the songs are sweeping and melodic apart from “The Hammer of Thor” which grabs a hold of some black metal and throws it in with ease.  It is by far the heaviest song on Hudufólk and one of my favorites.

Vocalist/Guitarist Jonathan Vanderbilt shows off his superb range throughout the recording while also displaying his strong skills as a guitarist. 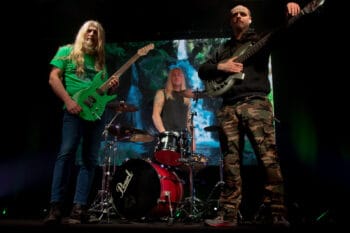 A killer, relentless, double kick beat by Simone “Zigo” Cescutti, dominates Hudufólk.  My legs got tired just listening to it!  Interestingly, Simone is leaving Celtic Hills to become a singer in his own band.  “Living Out of the Egg” is such an unusual track title that I had to Google the meaning behind it and found this:

Jonathan Vanderbilt, the band’s frontman shared:
“Simone Cescutti, the drummer of CELTIC HILLS, leaves the band to pursue a career as a singer. To say goodbye and wish him the best in this new adventure, he and Jonathan Vanderbilt have made a video to greet the fans with a song designed just for Simone’s new career: “Living Out of the Egg”. The song is present in the new album Huldufolk, coming out on April 1st, and maybe Simone will still play some live concerts, while the band is still rehearsing with the new drum substitutes.”  (Metal Shock Finland)

Based on this sample of his skills Simone will have great success.  It gave me the warm fuzzies that the band was so supportive to give him such a wonderful send-off.

“Metal Message”, another of my favorites on Hudufólk, pays tribute to their promoter Markus Eck.  The video has just been released.  It tells the story of this “German Heavy Metal enthusiast” in a 4-minute 30-second dedication.  Such a heartwarming way to say “Thanks” to a man who has done so much for Celtic Hills.

“This video is dedicated to the indefatigable Markus Eck and his agency Metal Message who has been the standard-bearer of true metal for years!!!” (Elevate Records, Facebook)

One more exceptional song to note is, “After the Earthquake” which is about the 1976 earthquake in Friuli.  Celtic Hills sing about the terror of the day and the strength and determination of the people of Friuli as they rebuild their city.  The video has really amazing footage of the rebuild, check it out!

► The official video lyrics of “METAL MESSAGE” from the album “Huldufolk”► SUBSCRIBE for more videos from Elevate Records► https://www.elevate2records.com…