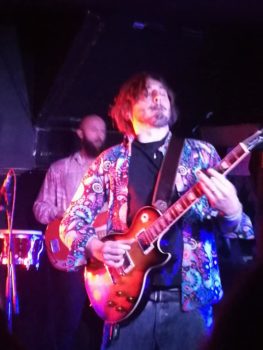 WILLE AND THE BANDITS: Live onstage Glasgow Hug and Pint

Wille And The Bandits came to Glasgow as part of their extensive spring 2020 tour of the UK. They stopped off at the Hug And Pint where they performed in a small room downstairs of the actual bar. The band has gone through quite a transformation since I saw them last with both “bandits” from then gone and three new “bandits” in their place. I was both interested and excited to see how those changes would affect the sound and performance. Certainly, it meant an even fuller sound with extra instrumentation.

The keys certainly made a difference but the fact that Matthew Gallagher also plays a mean guitar allowed for some fine interplay on the solos and some dual guitar harmonies at points. The other new guys Finn McAuley played both drums, percussion and bongos and Harry MacKaill added a ukulele along with the bass guitar to go with the various electric and acoustic guitars that Wille himself utilizes during a show.

A Funky Congregation In Glasgow:

Even on the first song of the night “Bad News” the keys were given plenty of scope. Lots of fills and flourishes to go with the fine slide work going on. Although they tend to be put in the “blues” category they don’t just stick to that. They can get a real funky vibe going on, a groove which gets people dancing (and there were quite a few ladies who partook of the opportunities when they arose) such as on “Find My Way” and “Keep It On The Down-Low”, on which the latter we were introduced to all the new members who were allowed to show their skills with short drum, bass and key solos. However whilst doing the solos they never lost that groove as the rhythm section was right on it keeping it flowing.

Vocally at times, Wille can sound like a preacher, southern in vibe. When he asked for a “Glasgow choir” on “Still Go Marching In” (which slightly reminds me of something that J.J Cale would write) he got it. Loud and proud. The congregation was up for it on the lyric line “when will that rainbow come”. Like a number of songs, they do this is one of peace. Hands were up in the air clapping nicely in time and the lap guitar slide solo was beautiful. 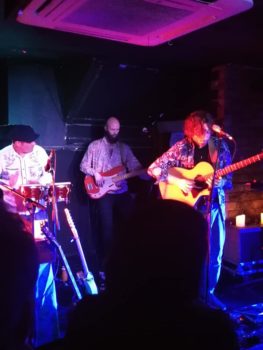 “Mammon” brought things right down. With Wille on acoustic guitar, Harry on the ukulele, Finn on bongos and Matthew on mostly acoustic guitar as well. The interplay and harmony work between guitars was delightful and shows the benefit of having an extra member in the band.

Before “Angel” Wille explained that the song or at least musical piece is almost therapy for him as he wrote it for his mum who passed away a few years ago and he just imagined her on the clouds and started writing. It is a monster of a piece that sounded better than ever in my view. It flits between haunting and melodic to progressive and psychedelic, a tad of electronic and a smattering of heavy rock. As a piece, it drags the listener in. And either pulls on the heartstrings or smacks you in the gut depending on the musical part. Again with having another member they were able at points to add bongos along with the drums giving it even more oomph! It is handy that they are all multi-instrumentalists as well of course.

Time To Rock Out:

When the moment is right they can certainly rock out and Wille can shred with the best of them. On a couple of tracks, he showed he could front a straight out heavy rock outfit. Track 10 on the night (which I didn’t write the name down of, stupid of me) had a Zeppelin vibe (I would say sort of Physical Graffiti era) about it. That swagger, groove and heaviness which also allowed the “choir” to join in on the “woahs”. The crowd did this so quickly and loudly the band looked around each other with smiles on their faces! Wille kept that going on into “Victim Of The Night”. Which seemed to have more soloing than I remember from the album version.

They finished the main set with “1970” which kept the crowd singing and transported us all back to what some would call the “golden era” of rock. I dispute that what with the amount of great quality rock, metal, blues, prog bands around at the moment, it seems a great time to be alive now. Sadly due to transport and the time I had to take my leave before the encore started (I am sure with the noise going on they would have returned) which was annoying. However, from the main set, I can say that the new band have added further dimensions to the sound and are most impressive. This tour looks like a bedding-in period, seeing how things sound with the material already out. I for one am very much looking forward to hearing what comes next studio wise.

The band continue their tour right into April calling at these towns and cities: Perth, St Boswell, Clitheroe, Derby, Gloucester, Cardiff, Guildford, Margate, London, Bideford, Exeter, Plymouth, Truro, Shoreham By Sea, Oxford, Wimborne and Bristol. And they are heading into Europe in May. All dates are on their website which can be linked to at the bottom of the review. 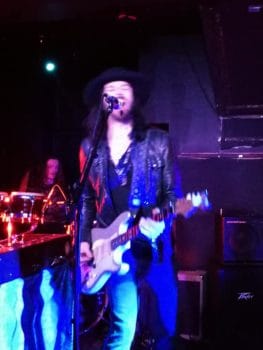 Support on the tour is coming from the Troy Redfern Band who took and shook the room up in advance of the headliners. From the opening salvo of manic slide and heavy beats that transformed into opening song “The Other Side”, they grabbed the crowd by the scruff of the neck. Glasgow responded suitably in kind. Only there would someone shout loudly at the band between 2 songs “whit’s yer nem?” translated out of the local dialect to “what is your name?” due to a desire to check them out later. There was plenty of laughter at the shouts from the audience.

I didn’t catch all the song titles sadly. But their set was blues, fast, slow, heavy. All blues with lots of great slide guitar going on from the main man of this fine 3 piece. The mix of heavy and slow blues number (from the setlist I saw “D.T “?) was wonderful. Even though he had managed to burst a string he was still going for it, not missing a note.

Due to the vocal response from the audience, Troy remarked that this was the best crowd of the tour so far. He said “honest, I don’t say that every night” causing a mix of whoops and cheers along with the odd “aye right” from the cynics. He reminded me a little of a mix of the late greats Rory Gallagher and Johnny Winter with his energetic performance and slide work. It was a short half-hour set which tantalized us all to want more. A lot more, going by the shouts for an encore.

My Final Thoughts On The Gig:

To summarise, this was a great night of bluesy rootsy rock with prog and psychedelia thrown in for good measure performed by 2 bands who can deliver big style. Both bands will hopefully go onto bigger venues as time progresses. They deserve larger audiences considering the talent on show. If this tour is coming anywhere near you I highly recommend it.

Wille and the Bandits

Ok I admit it, I wasn’t a die-hard 10CC fan, but for anyone growing up in the ’70s you didn’t have to be. They were responsible for a good portion of the soundtrack of some of the most important years of one’s young life. When I first decided to go to Sweden Rock after years […]