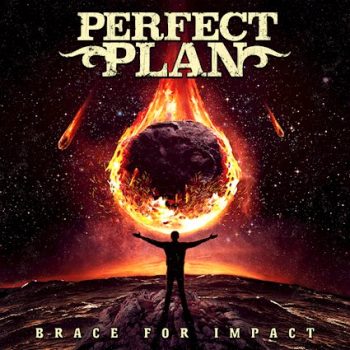 Perfect Plan is an AOR/Melodic Hard Rock band from Örnsköldsvik in Sweden and consists of the members:

Brace for Impact is their third studio album and they have also released a live album recorded in a studio without an audience during the pandemic. Kent Hilli is now one of the most sought-after singers in their vein of music. He has released one solo album and is now also the singer of Giant. No wonder because he is an amazing and powerful singer.

The album kicks off with the great song “Surrender” which reminds me a little of old Queensryche in the verse and it is a little heavier than we have heard from Perfect Plan before. It took me some listens before I really got into the song but now it is great. Overall I think they have a more mature and heavier sound on this album than on their previous ones.

“If Love Walks In” comes next and has been one of the songs released before the album came out. It is a full-on AOR masterpiece with cool riffing from Rolf. Pre-chorus there comes this awesome harmony singing and then the chorus is really catchy and great.

“Can’t Let You Win” was also released before the album and what a great rocking song this is. The guitars riffing away and the chorus is huge. I really want to hear this song live when I get the chance to see them. Hopefully soon.  Rolf’s solo is also great in this song.

The production is much better than on many of Frontiers (record label) albums these days which I think sounds too digitalized. This is more like a real band playing in the studio like in the old days and you can hear this on the next song “Gotta Slow Me Down“. Here it sounds more like the classic British hard rock bands from the 70s and maybe a little like Europe from their Out Of This World era. Great song with a great chorus and I think Kent is nailing it with his voice in this song. Should also be a great song to hear live.

“Stop The Bleed” is also a bit heavier than normal for Perfect Plan but it sounds huge and the band is on fire. The ballad “My Angel” slows it down a bit. Kent‘s singing on this one is giving me goosebumps. Many people compare Kent with Jimi Jamison from Survivor and here I can hear a little of Jimi and also a little of Steve Perry in the beginning. But when the huge chorus comes it is really Kent we hear. He has his own recognizable voice so you can tell it is Kent when you hear him sing.

“Devil’s Got The Blues” is a bluesy rocker with a great hook and chorus and my feet can’t stop stomping to this song. Great guitars from Rolf and of course Mats, Fredrik and Leif are great on their instruments throughout the whole album. The bass is really great in the mix and brings the heaviness we need and drummer Fredrik is hitting the drums really hard.

“Bring Me a Doctor” is a faster rocker and has this cool drive that gives the song a kick in the b..t. Great backing vocals on this one in the pre-chorus.

“Still Undefeated” kicks off with a heavy riff that reminds of their Swedish comrades TREAT and it has a great chorus. Leif got to do a little keyboard solo and it sounds great. I really like this song more and more each time I listen to it.

Next up is the song “Emelie” which is a mid-tempo softer song with a summer feeling. Here we get great harmonies and backing vocals once again and a great chorus. In the late 80s, many Swedish AOR bands sounded like this and I love it. It brings back memories from that time.

The album comes to a close with “Walk Through Fire“. This sounds like it should fit on the Survivor album Too Hot To Sleep album.

I think this is their best album so far. Great musicianship, production and not a bad song in my ears. I really hope they get a lot of new fans with this and that all the fans that have followed them since the beginning enjoy it as well. If you are into bands like Survivor, Europe, Treat, Giant etc you should definitely buy this album.

To the band, I wish them all the best and thank you for the music!

Check out more of my reviews: MetalMike71