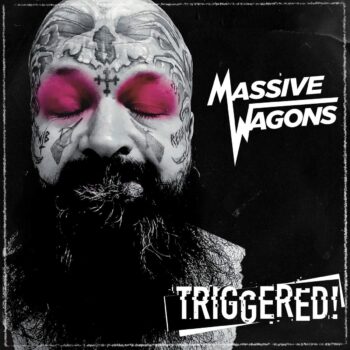 The Carnforth collective are back with yet another album full of crowd-pleasing anthems and intelligent tracks. Massive Wagons are, along with The Struts, the hardest-working UK band, they just never seem to stop. The energy these guys possess is phenomenal.

With the strong settled line-up of Baz Mills on vocals, Adam Thistlethwaite and Stevie Holl on guitars, Adam Bouskill on bass and Alex Thistlethwaite on drums, Massive Wagons go from strength to strength.

Amazingly, Triggered! is their sixth studio album, a decent return in the 10 years since their debut, Fire It Up. After hitting the big time with previous effort House of Noise, Triggered! cements Massive Wagons’ place at the top table and proves they can mix it with the big boys.

Massive Wagons have consistently been socially aware and this is none more apparent than on the opening track, “Fuck the Haters”. Simple title, simple message. In essence, it is an anti-bullying anthem, calling on everybody to live their own lives, do what they want without fear and, well, fuck the haters. This is a very strong start.

“Please Stay Calm” follows and is a great mid-paced rocker with beautifully constructed guitar. More intelligent lyrics too, of course.

Skindred’s very own Benji Webbe is the special guest on “Generation Prime” and his influence is clear. This track is a rock/metal/reggae crossover and is a real treat. Covering the topic of entitled people who sit around doing nothing with their lives but expect all the best things in life immediately. I couldn’t agree more.

“A.S.S.H.O.L.E.” follows which is fairly self-explanatory but seemingly aimed at one particular unnamed individual. There are some great lines in there with my favourite being “a bothersome pestiferous ring piece”. I was disappointed they didn’t use the UK version – arsehole – but they get in ‘wanker’ so that’s fine.

Next up is “Skateboard”, an infectious 3-minute track about, I think, burning out and going nuts thinking about what that ultimately leads to.

Whatever the subject matter of the tracks they’re always, without exception, singalongs. You just can’t help it. 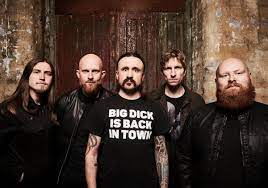 The title track comes next and the punky chops are the perfect accompaniment to a song about people who default to disagreeing with everything, all the time. ‘Triggered’ must be up there with the most used phrases of the 21st century and this track explains how it has been hijacked by professional objectors.

I’m so impressed how Massive Wagons don’t just churn out cliched rock n roll which they could easily get away with due to their anthemic, made-for-stadium style. They are intelligent and humorous.

“Giulia” is next which is a classic rock track with a traditional, excellent solo. Whilst sitting comfortably in the rock category the band have great variety and each song is a pleasure to behold.

“Germ” as you may expect from the title is not a jolly ode, but a song about being let down when in need and how the narrator will not help the offender when they themselves are in need. The turn of phrase they have is so funny and clever.

More great lyrics abound on “Never Been a Problem” along with monster riffs and a brief but powerful solo.

“Big Time” is your classic Massive Wagons fare. Power, melody and perfect pace are the orders of the day. Stirring stuff.

Following the melodious refrain of “Big Time” comes the frantic “Sawdust”. It’s a punky track with rock sensibilities and a real punch in the gut.

To bring Triggered! to a close is “No Friend of Mine”. Yet another track made for the live arena. It has not yet been played on the current tour where they’re co-headlining with Ugly Kid Joe but I have no doubt it will soon make an appearance. With all the “Who are ya?” calls it’s got crowd participation written all over it.

This is an excellent album with all the classic Massive Wagons hallmarks. There’s social comment, intelligent and humorous lyrics, anthemic arrangements and balls out rock with a bit of added punk.

I feel it’s an improvement on House of Noise and there’s only one way these guys are going. Triggered! Is out now on Earache Records.

Check out my other reviews here. Sparky.