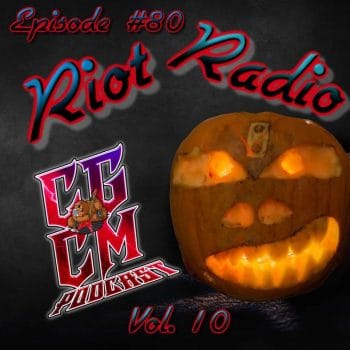 Welcome to CGCM Podcast‘s Riot Radio! The Riot Radio concept: CGCM brings you a podcast episode with less talk and more rock. Terrestrial radio has become homogenized. Satellite radio falling to the same fate. Remember the days when radio played bands like Helix and AC/DC etc and not just the hits, but deep cuts and new music? How about a brand new band? One that you’ve never heard before, perhaps even a foreign band? Miss those days? Well, CGCM is bringing them back! That’s what our Riot Radio is all about! The co-hosts take turns each Riot Radio episode in playing solo DJ to spin some great Hard Rock/Metal music that you may be unfamiliar with and we feel needs to be showcased. You know…how terrestrial and satellite radio SHOULD be! Welcome to CGCM Podcast EP#80 – Riot Radio Vol 10 (Meister’s Halloween).

Alright, my spooky ghouls, goblins, and ghosts… it’s Halloween night 2019 and I’m Rich “The Meister” Dillon, your host for this episode of CGCM Podcast‘s Riot Radio theme. Tonight it’s all about Halloween as I spin you some tracks in the Halloween theme.

A big shout out to Patrik Olofsson in Sweden as it’s his personally carved EDDIE pumpkin on the artwork and in the show notes, great job mate! Thanks especially to all the folks that commented and suggested tracks on my FB post as well!

TBH my little ghosties this is my third recording of this episode! I had tons of tracks and options. I went through all the usual suspects like Maiden, Wednesday 13, Twisted Sister‘s “Captain Howdy”, Helloween, and the like but you know me, I focus on the smaller bands and that’s what I’ve mostly done here again. My intros were stale…er than these ones! And my sound clips didn’t work as I’d hoped. So third time lucky and here we are.

Marilyn Manson – “This Is Halloween” (snippet)

Alice Cooper – “He’s Back (The Man Behind The Mask)” (FACEBOOK)

FireWölfe – “We Rule The Night” (suggested by Jeffery A. McCormack) (FACEBOOK)

Feel free to like and share, but most of all if you like what you hear, support the artists and buy the albums! AMAZON.ca / AMAZON.com / AMAZON.co.uk. To continue the mayhem check out our Audio Episodes and rate us on Podchaser!

We want to hear what you think! Tell us your favourite tracks from this all of the Riot Radio Episodes. We will use your votes and comments to compile and end of year CGCM Podcast Riot Radio Chart. Remember the old CHUM 30 Charts? Help us create Buzzsaw’s Top 24! Why 24? It’s always beer related with the Canadian Geeks.

Furthermore, the CGCM Podcast is proudly sponsored by The Farm Rehearsal Studios/Farm Rocks Build-A-Band Program in Markham, Ontario. And by Cloven Hoof Rum in Brighton and Hove, UK. In co-operation with King Art Music Management/Promotion, in Helsingborg, Sweden.

With three team members from CGCM Rock Radio on hand at All-Star Festival, here’s our respective top five favourite performance lists! What were your faves? Be sure to check out our daily blogs and photo galleries as well: Full Band Photo Galleries and More Follow this link for more All-Star Festival coverage on CGCM Rock […]