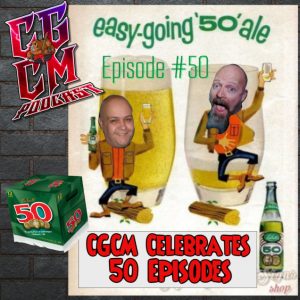 Raise a toast and join the Canadian Geeks as they celebrate their 50th Episode. It’s a golden anniversary and just might be the most intoxicated episode yet. For those aware, that is quite a statement! So grab some cold ones and try to catch up. On second thought that might not be a good idea at all. Disclaimer – CGCM Podcast can not be responsible for anyone attempting to keep up with the Meister during this episode or any other for that matter.

The Geeks had numerous meetings and discussions prior to this episode. They wanted to celebrate this epic milestone so there had to be drinks! They wanted to commemorate this milestone with something extra special. In what can only be described as one of those “My Granparents Went To Florida And All I Got Was This T-Shirt” moments, the Geeks came up with 50-50-50!

They put 50 bands in a hat (ok they are really rather lazy so probably there were less than that but that is simply speculation) and they took turns picking bands names from the hat. Once a band was chosen they were supposed to play the 50th song recorded by that chosen band. The result would be 12 randomly selected metal tunes to entertain both the listeners and the hosts.

Sounds easy enough but as you might be aware, nothing is simple especially after ridiculous amounts of Rhythm & Brews are consumed. On the bright side you will hear great music from Doro (ok you can judge that one), KISS, LA Guns, Helix, Scorpions, Danko Jones, Def Leppard and more! It’s a Tuesday night rock and roll party of epic proportions.

As always they kick things off with Dick In The Dirt tracks. This time they choose a “50” theme for this and come up with one from Swedish Rockers, Bonafide and the lovely Lee Aaron.

So go put on your tux. Or your fancy red dress because you’re all invited to the CGCM Podcast’s 50th Anniversary Party.

To continue the mayhem check out our other Audio Episodes and rate us on Podchaser! And as always: buy the albums! AMAZON.ca / AMAZON.com

Furthermore, the CGCM Podcast is proudly sponsored by Rhythm & Brews Brewing Company in Cambridge, Ontario. By The Farm Rehearsal Studios/Farm Rocks Build-A-Band Program in Markham, Ontario. And by Cloven Hoof Rum in Brighton and Hove, UK.

It’s the most wonderful time of the year! The CGCM Rock Radio Top Ten Lists. Each and every year the staff at CGCM toil for endless hours listening to literally hundreds of albums and then select their own personal top ten favourite albums from the year past. The global pandemic may have robbed us of […]

The Canadian Geeks continue to come up with ridiculous ideas to play a bunch of music and drink beers. The Alphabet Game is just that. Round 2 of the Alphabet game was recorded at our new CGCM Studios, better known as the ROCKPILE! So the beer consumption is real, the stupidity is real and our […]