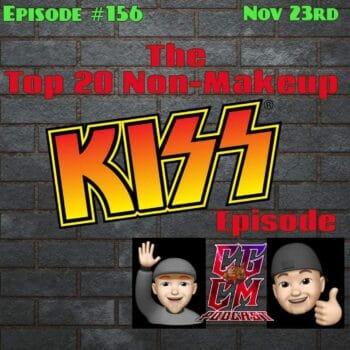 A while ago I saw a social media post entitled the “Top 20 Non-Makeup Kiss Songs”. It got me to thinking three things. First, how much I miss non-makeup Kiss. Second, how different the selections I was about to read would differ from my own. Lastly, this would make a great podcast topic. So it was then that I decided not to open the article and keep it under wraps until we had time to record this episode.

It’s no secret that the Meister and I are huge Kiss fans. I jumped on at Lick It Up (the first non-makeup album in 1983 and the Meister’s first album was Crazy Nights (we will forgive him for that). All in all, Kiss released seven studio albums sans makeup and a couple of bonus tracks that were included on a greatest hits compilation. These albums were the soundtrack to our adolescence. These were the albums we would be waiting outside the record store on release day in complete anticipation.

1997 – Carnival Of Souls: The Final Sessions

So we decided to separately compile our own top 20 songs of the non-makeup era and discuss them with all of you. We also kept the social media picks a secret and reveal them along with our picks.

As much as we would love to play all of these picks for you in one huge celebration, the rules of the radio prohibit that. It’s ok though because we have a plane. It seems there is an abundance of artists that have covered Kiss music from the non-makeup era and we have collected a few of those to entertain your ears as we celebrate the greatest band in the land…KISS!

Check out all our Upcoming Release announcements New release from: BARNABAS SKY – What Comes To Light (January 20, 2023) The melodic hard rock all-star project BARNABAS SKY, led by German guitarist and songwriter Markus Pfeffer (LAZARUS DREAM/WINTERLAND), launches its sophomore album What Comes To Light! Stylistically, the project of the multi-instrumentalist from Kaiserslautern combines groovy […]