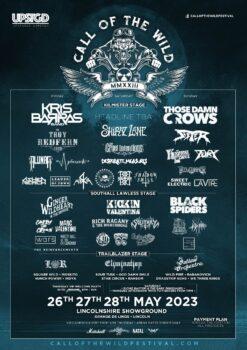 CALL OF THE WILD – December Announcement

Call Of The Wild December Announcement.

Shortlisted in TWO categories (Best Family Festival & The Grassroots Festival Award) at the UK Festival Awards 2022 in just its second year, Call Of The Wild Festival is certainly aiming to be the leader of the pack. With its family friendly
atmosphere and diverse line-up, there’s something for absolutely everyone and with our latest round of announcements, we hope we fulfil your expectations.

Friday night’s headline band are no strangers to Lincolnshire, having stopped off here several times already, their main man has been part of the Led Zeppelin Symphonic shows at London Palladium, he also fronts Supersonic Blues Machine he’s an ex-MMA/Cage fighter and his band’s latest album Death Valley Paradise sees him take a more rock fuelled road which has been received to massive critical acclaim……..Call Of The Wild is proud to announce The Kris Barras Band.

The Cruel Intentions will be Bringing their Swedish/Norwegian Rock ’N Roll for
the first time to Call Of The Wild, their latest album Venomous Anonymous is a
spitting, dirty slab of music which festival band booker Raz White has on constant
rotation at COTW HQ. We cannot wait to see these guys rip the stage apart. The
Karma Effect are a band who’ve been on the Call Of The Wild radar since their
inception, describing themselves as bringing a 21st-century take on classic ’70s rock
they’re a band who’ll fill the Sunday groove perfectly, an exciting young band we
think have a massive future ahead of them.

Joining them will be a further 20 bands listed below throughout the weekend, plus
Call Of The Wild gets prehistoric on the Saturday when we’ll be joined by a full-sized Richie the Raptor & the Baby Dinosaurs which is sure to send your little cavemen &
cavewomen wild. If you have enough energy left they may be The Pretender bringing
Times Like These but the Fu Fighters aftershow party in the Marquee from 11pm on
Saturday is certainly going to bring out The Best Of You!

Together with the unmistakeable Those Damn Crows bringing Call Of The Wild
2023 to a climatic finale on Sunday night and Saturday’s Headline band yet to be
announced, you can agree it makes for one awesome weekend!

All VIP tickets SOLD OUT but with Christmas just around the corner there is no
better gift than solidifying fantastic memories in a family-friendly environment so
when not get your weekend tickets NOW. TICKETS

Bands added to the lineup:

With a further announcement to follow in the new year are we leaving the best for
last?

Call Of The Wild Festival 2023 Dare To Be Different.

CGCM‘s Full Coverage of the whole 2022 event can be found here: CALL OF THE WILD FESTIVAL 2022