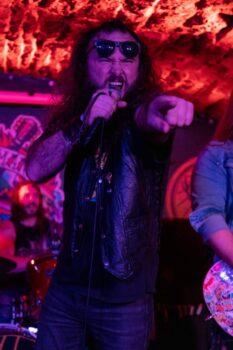 As Good As Their Word:

US Rockers The L.A. Maybe left their home country to kick UK arses in some of the coldest and snowiest conditions imaginable. The last time the band were here in the UK they played Call Of The Wild festival and I think one other show (Blackpool I believe). They were due to play more gigs but had issues with the promoters over here not actually confirming all the gigs leaving them stuck gig-wise. In the interview that we at CGCM had with them at that festival, the band said they had learned a harsh lesson and would do their own promotion/gig setups as they hated letting folks down (not that it was their fault). One of those gigs should have been in this reviewer’s hometown of Edinburgh. The band were as good as their word and booked quite a number of shows around the UK and made sure they hit Edinburgh. The band are obvious fans of classic hard rock, inspired by artists like AC/DC and Guns ‘n’ Roses amongst others, but also perhaps due to their location in the US also of Southern rock like The Allman Brothers and more modern The Black Crowes. At times vocally I hear quite a bit of Jizzy Pearl from the band Love/Hate what with some of the notes being hit.

Originals And Covers, A Proper Setlist:

The band only have the one album (the excellent Dirty Damn Tricks) which they played the majority of along with a new song for the next, but being a band that want to put on a show and give value for money they also threw in some covers, some which you could say “yes that sounds about right” and some which were real curveballs. The good thing is they bloody nailed all of them. They are an entertaining band to watch with members moving around, throwing poses, sometimes just taking the piss and some dancing from singer Goliath who actually was pretty good at the snake hips thing… if I tried that I would firstly look like an idiot and secondly probably give myself an injury😂! Goliath didn’t speak much between songs but was always interacting with folks in the crowd (quite a decent one as well considering the time of year and the bloody weather which I was pleased to see) and somehow managing to never have his shades fall off no matter if they were on his nose or forehead. There were smiles and laughs from the band all night as they seemed to be having a ball, luckily which transferred to the audience. 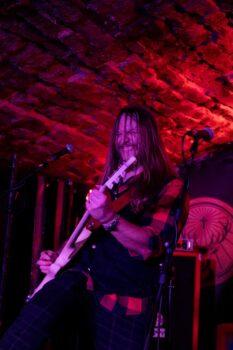 From the dirty groove of “She’s Reckless” to the urgency of “Suckerpunch” which hits like a mallet to the face and the AC/DC inspired but wonderfully sleazy sounding “Mr Danger”, these guys have the songs and the attitude to get a party started. During the latter, singer Goliath and bassist Rahsaan indulge in play fighting, egging each other on having a blast. The placement of the covers made good sense. Dropping them at various points to keep things interesting. The first break was for an absolutely stomping run-through of “Monkey Business” from Skid Row which went down very well. The mood and funky groove matching many of their own tracks. One thing about their choices was that they were all songs that needed some high and powerful vocals, they were no easy options chosen.

They then went back to their own material including “Take Me Away” and “Up Next To You“, the former was introduced by a simple question from Goliath in “Can we fuck you up?” The funky rocker (with nods and winks to G ‘n’ R rather fittingly) certainly had Goliath hitting notes that at times were bloody impressive.  The latter sounded brilliant to me, with the vocal callbacks coming over superbly. All the guys can sing and this allows them to play with their harmonies. Another cover was said G ‘n’ R where they did “Welcome To The Jungle” which sounded dirty and nasty, the way it should. “Piece Of Mind” led into a musical interlude with Goliath leaving the stage to let the band play (and guitarist Dallas to take up lead vocals). There was a cartoon-style melody at the start which led into the guitar melodies from “Hotel California” and Metallica‘s “Master Of Puppets” before heading into the song “Kiss” by Prince which Dallas sang really well, it is one of those songs that is pretty damned high. It was pretty faithful and a load of fun (I certainly didn’t expect that) before the band merged into “Purple Rain” which was lovely, of course with some tasty soloing. 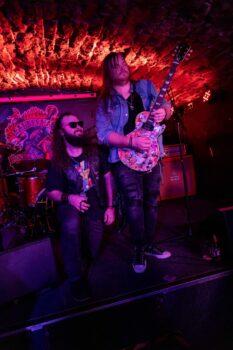 All Kneel For Dallas On Guitar: Bannerman’s Bar Edinburgh

They finished with three of their own songs including newbie “Down To Fight” which is nice and heavy whilst being catchy as fuck to sing along with.  Before “When I’m Gone” Goliath took the time to talk briefly about mental health awareness, reminding folks that should they be struggling not to be too proud to ask for help and for us all to be ready to help others when they are struggling, to be ready to listen which might be the only help the person really wants or needs.  The song itself is a pure Southern rock ballad which sounded as good live as on the record. They finished with the sleazy hard rocker “Oh Sugar” which had the crowd singing the call back in the chorus loudly. By the end, everyone was joining in having fun. A great way to finish the show.

Main support came from Richy Neill And The Reinforcements who hail from Edinburgh itself. The band formed around 2016 and at this time have released two EPS called Life Stories and Rise And Fall. The band plays a mix (in my view) of hard rock and Americana, very much songwriting to the fore with some excellent grooves and riffs making the songs very catchy and easy to sing along with. Richy himself is quite a character and a chatterbox (so am I so I am not criticizing him) so much so that at one point as he was saying something bassist Christian said to him “we only have a 40-minute slot“, which was one of the best telling the singer to shut up I have heard in a while😀. Most of the songs on the night were new ones, coming from a new EP coming out soon in early 2023 (he mentioned that a lot and quite rightly). Opener “Tear It All Down” certainly came out of the traps and had a great chorus, I was singing along in no time. “Opportunist” had a very sweet heavy groove/riff which went down well with the folks near me with heads bobbing. “Wandering” sounded darker, which seemed fair as the song written by guitarist Steven was about mental health, it certainly had an intensity about it. A couple of times singer Richy went walkabout in the crowd, both in “Lights Out” (if memory serves me right) and “Empty Promises” where he even dragged a member of the headliners into the front area. “Wings” allowed Christian to take the lead on bass, pounding out a groove which the rest of the band followed along with. This was a very jump-up-and-down type song (there were folks doing that along with Richy). I am very keen to hear the EP as the quality of the songs on offer were really good. As a live band they are fun, plenty of chat and laughs, with the band at ease with crowd interaction. A special round of applause on the night for drummer Tom on drums who ended up playing twice… 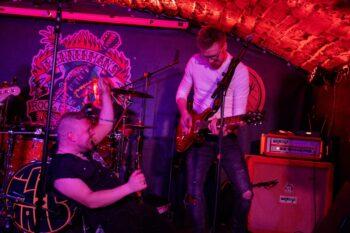 Success Through Adversity (Or Stupidity?):

The opening band Thirteen nearly didn’t play due to a drummer problem, drinking before a gig to excess is not big or clever folks. As you can imagine his bandmates (I think more ex-bandmates) were not particularly happy with him. He left the building. They could have pulled out but utter credit to them they wanted the show to go on. Luckily the aforementioned Tom from the Reinforcements jumped behind the kit. He didn’t know any of the songs we were told so anything could happen (or go wrong). I won’t do a proper review of the band here as it was a tricky situation for them, but what they did was terrific on the night. Yes, there were moments of trying to keep it together, but on the whole, they carried the set off with great aplomb. It also helped that singer Dolly (I believe) has a decent line in humour, cracking jokes etc to keep it all flowing. I did like the name they gave one song just for the stand-in drummer “it’s called the second song from the soundcheck“. That raised plenty of laughs from the crowd. If attitude counts for anything then these guys deserve success. It helped that they had some cracking tunes as well in the vein of Crue meets The Dolls with a bit of punk like the Pistols. I enjoyed the set and so it seemed did everyone around me. A definite success. 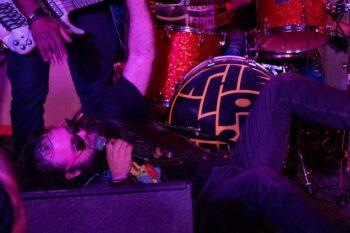 Goliath (L.A.Maybe) Throwing Himself Around At Bannerman’s Bar

There was a comment made on the night about loving Monday nights as they are the most rocking of nights, that being it is really bloody hardcore rock fans that get out on them! Thankfully a fair number decided to get along on a bitterly cold night to catch another of Bannerman’s three band bills. The venue continues to pull in great bands, especially upcoming artists whilst doing their best to promote local/Scottish talent and this was no exception. The supports did a great job with the crowd nicely warmed up for the headliners who rocked the fuck out of the place. The way The L.A. Maybe tore about their set like they were playing an arena was fantastic. The band played really well, plenty of melody whilst rocking out and cranking out some quality songs of their own (I will say it again, their album is chokka of good rock ‘n’ roll anthems) mixed with some well-played covers. If there is any justice these guys should make it big. If (preferably when), then I know the fans at this show (and I am sure all the others they have done here) will be telling everyone else  “I saw them play a club” with a sense of pride! Do you want to rock and have fun? Then The L.A. Maybe are for you.

A huge thank you to Sinclair MacKenzie for his photographs on the night!

Check out my other reviews and articles here