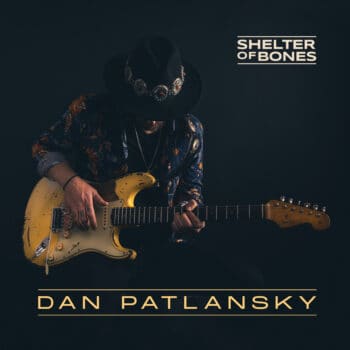 Shelter Of Bones is the tenth album by South African bluesman Dan Patlansky. He has played with or supported names such as King King, Joe Satriani and Bruce Springsteen.

There are also awards for such things as “male artist of the year” in Blues And Soul magazine (2015), being placed fourth in the list of “best rock guitarists in the world” and nominated for “best international male artist” (2016) by Planet Rock.

He started writing for the latest album back in 2019 and with the world stopping he thought he should take a bit more time with it and work out how he “wanted the songs to come across” as he wanted to “make the album that he would want to listen to“. Many of the songs capture how he feels about the world at this time and others are very personal including a song about his wife who was diagnosed with an illness at one point and how he dealt with that situation. It is an album of blues-rock with funk and soul running through it as well as emotion and depth.

He opens with a heavy rocking blues track called “Soul Parasite” which is angry-sounding as he attacks many of the modern world leaders who appear to be in the jobs for personal gain and don’t really care or serve the people. He talks in the press notes about the problems in South Africa with corruption and that reminded me of something said by Israeli outfit Orphaned Land frontman Kobi Farhi who at a UK festival said that if we think our leaders suck we should take a look at where the band comes from as in the Middle East they have some of the “shittiest leaders in the world“.

It seems nowhere these days are safe from inept corrupt leaders! The song has gritty vocals and a heavy riff for the verses but a very melodic chorus. There is a very sweet groove surrounding the verses as a counterpoint to the angry-sounding verses themselves.

He swings things around to straight-on blues with a hint of jazz in “Snake Oil City“, a fictional place where liars, thieves and chancers live, I am sure many listeners may feel it is about where they live. This has several very tasty solos from jazz to blues and even hard rock within it. He really shows his versatility as a guitarist on this. At one point he sings “crooked politicians never get jailed” and he sounds as frustrated as any of us knowing that appears to be true.

“Selfish Lover” could be about a partner but is actually about his relationship with tobacco. The song works on both levels, his own selfish lover and the listeners (who might have their own problems with human love). It is an upbeat, funky, rocking track which should be a blast live. The vocal is very 90s alternative and the guitar has a fuzzy sound in the solo, it also rocks hard. “Never known such a selfish lover, it’s time to say goodbye” he sings, hopefully, he has managed to kick the old habit!

“Lost” changes things once again. An absolutely gorgeous heartfelt ballad which I mentioned earlier is about when his wife was diagnosed with an illness that they thought she might not get through. The idea of being “lost” even at the “thought that you’d dissappear” as he watches her sleep “holding you tight, holding you dear” is captured with real feeling. He even refers to their marriage vows that he would stay to the end if needed hits hard. Even the guitar picking style he uses just fits perfectly with the words. The good news is that she did recover thankfully but as he sings you get that tug of someone who is just desperate in their hope for that outcome. Stunning track. 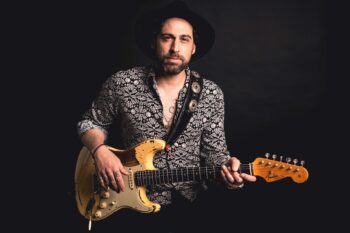 Changing it back around the album comes a more upbeat foot-stomping groover in “Bad Soul” which is about certain folks who seem to be born and bred evil bastards who just can’t change even when others have tried to help. The chorus is very commercial sounding, easy on the ear, and to join in with.

“Presence” is a funky little number which the intro made me think of “Walk This Way” by Aerosmith, but only for a few seconds before it takes on a life of its own. Lyrically it is all living in the actual moment as lets face it we have no idea what could happen tomorrow.

“I’ll Keep Trying” again slows things down as he talks about his personal faults and how they affect his own relationship with his wife, finding the way and the will to find constant improvement. Musically the guitar sound is reminiscent of Mark Knopfler of Dire Straits and the way he makes his guitar sing whilst the keys underneath add to the tenderness of the piece. The chorus has a bit more bite to it, but nowhere near enough to take away from the beauty of the song. This is feel over power.

“Devil’s Dopamine” is a funky rocker with bass high up in the mix and in your face. A song about the perils of modern social media, how much folks are glued to it and how some folks are not able to discern what is true and what is nonsense.

“It ain’t easy” he sings at the start of “Sweet Memories” in which he tries to see the positives in these difficult last couple of years. In particular that he was able to spend more time with his family, which as a touring artist must have been rather pleasant even if the cause of having to stay home was awful. “No preacher, no doctor could have seen… sweet memories“, ie who saw that coming? This is a lovely track, and I do like the way he stops the guitar solo, there is silence before the chorus comes back in.

“Hounds Loose” is a modern take on the old story of Robert Johnson selling his soul to the Devil. This was the single release and the video can be found at the bottom of this review. This has a more hard rock vibe but is still very blues. “The Devil’s in town” he sings rather ominously before unleashing a tasty guitar solo.

The title track “Shelter Of Bones” concludes the album. It is an atmospheric number which is kind of a letter of instruction to his kids. For the first 2 minutes it is extremely sparse soundwise.”Live your life, you’ve got it, don’t look back… regardless” he sings. An encouragement to move forward to make their lives as fulfilled as possible. The lyrics go on to remind them that for as long as he is around he is there watching their growth and for support. A very haunting and beautiful song where the solos match the emotions fully.

A very good collection of well-written and thoughtful songs that floats between moody and reflective to upbeat and funky. The playing is excellent throughout (as expected) and the production is top-notch. It sounds great and anyone who loves blues, rock and funk with plenty of soul and warmth will appreciate this album It will be released on Friday 25 February on the Virgin Music And Artist Label.

Check out my other articles and reviews here. Tom