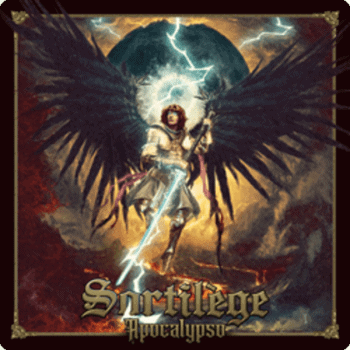 SORTILÈGE was considered as the new sensation of the French metal scene of the 80s alongside with Attentat Rock, Satan Jokers, Vulcain and H-Bomb. The band performed in many European festivals culminating in the famous Breaking Sound festival in Le Bourget (France) in August 1984.

1986 was the time for SORTILÈGE to release their second studio album Armes de Héros. After that, the band experienced internal tensions which have put an end to a short but effective career which had nevertheless left a legacy…

Keep It True Festival 2019 in Germany: More than 30 years later, SORTILÈGE made their comeback with original singer, Christian “Zouille” Augustin! It was the beginning of a new story and a new era. In 2020 they achieved a record deal with Verycords. The band is now formed by Zouille, Bruno Ramos and Olivier Spitzer on guitars, Sebastien Bonnet on bass and Clement Rouxel on drums.

The new line-up decided to re-record 12 classics from the 80s plus two new additional songs, which resulted in the Phoenix in August 2021. The release received tremendous feedback from the fans and the media and was followed by live appearances at the Heavy Metal Maniacs festival (NL) and Vouziers Festival (FR). In 2022 they returned back on stage at Lyon, Nancy, among others before the super Parisian show at the Elysee Montmartre. Then SORTILÈGE hit the Hellfest mainstage with continuous amazing feedback.

In the meantime, the new full-length Apocalypso was recorded, offering 10 new songs including special guests (Myrath, Loudblast’s Stephane Buriez). The album will be released on March 3rd, 2023 and a promotion tour will follow in April/May 2023.