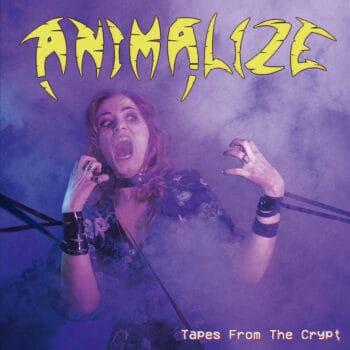 ANIMALIZE – Tapes From the Crypt

Since 2018, France’s Animalize keep playing the kind of music that you (or your parents) may have listened to 40 years ago. You know that “heavy metal” sound that appeared at a time when none of the band members were born. Well, they’re still doing it.

The roots of France’s Animalize go back to 2014 when the moniker was first chosen, but their lineup didn’t solidify until 2018. From the beginning, the power-trio’s influences were set: heavy metal from the ‘70s and ‘80s, but specifically the likes of Loudness, W.A.S.P., Tokyo Blade, Glenn Tipton, Ritchie Blackmore, Glenn Hughes, and Annihilator and especially classic French heavy metal like ADX, Malediction, Sortilège, and Warning.

However, it is the band’s love of movies which arguably influenced Animalize’s outlook the most. For them, a visual identity and atmosphere – whether in their visual aesthetic, be it artwork or onstage, or especially their eventual videos – are of the utmost importance. Film also feeds their lyrics, quite often. The band state that such movies as Evil Dead, Mad Max, Pet Sematary, Masters of the Universe, and Terminator are among their most beloved.

While they would bring both to Technicolor climax with their debut album for Dying Victims, Meat We Are Made Of, during the summer of 2022, Animalize nevertheless came out with all guns blazing two years prior on the preceding mini-album Tapes From the Crypt. With an eye-grabbing (and era-authentic) cover setting the stage, the originally-limited Tapes From the Crypt managed to make Animalize’s strengths plain and POWERFUL: cruising speed metal glory crossing swords with radio-ready traditional metal of a most mid-‘80s vintage. This is the sound of Animalize at their most straightforward – and, arguably, most accessible – for the proceeding debut full-length found them upping the vocal layering and especially the complexity considerably, but the gleam & glory of Tapes From the Crypt is undeniable and undeniably fun. A snapshot of a still-boundless band finding their wings, now finally reissued on all formats: the saga of Animalize begins here!

Tracklisting for Animalize (France)’s Tapes From the Crypt