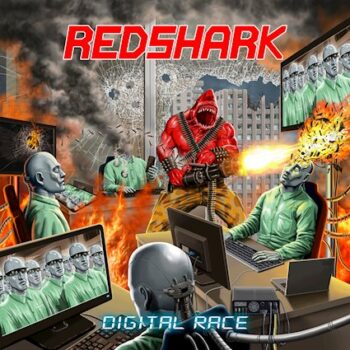 Redshark was founded in 2012 in Barcelona – Spain, by Philip Graves (guitar) with the aim of delivering classic pounding heavy speed metal. Their traditional 80s metal influences may plunder the nostalgia circuit but Redshark are ruthlessly carrying the torch with great attitude, and powerful melodic songwriting.

The band had their full line up fixed in 2013 with Javier Bono on 2nd guitar, Mark Striker on drums, Chris Carrest on bass, and Pau Correas on vocals. Their debut official release Evil Realm EP came out in 2019 and showed the band pushing the velocity further. Those intense five songs drew a roaring response and helped to spread Redshark name nationwide and abroad.

The band’s albums front cover concepts look entertaining with their comic book type of artworks depicting a mad red human shark on a killing spree. It also represents the band’s out for blood impulse in churning out those hard-hitting riffs and also refers to their energetic live performances. That red shark is obviously the band’s mascot.

In 2021, they composed and recorded their full length debut album Digital Race. It was produced by Jaume Perna (Jack Dark) and mixed & mastered by Gonzalo Vivero in In The Red Audio. As always, the cover art was by Jose Antonio Vives.

LG Valeta, guitar player from the much-acclaimed ‘77 guests on the track “Pallid Hands” with a stunning Flamenco guitar solo.

Redshark is pursuing their heavy speed galore with Digital Race, sticking to their traditional and catchy melodic sound that has been associated with the band 80s tinged Metal since their early days.