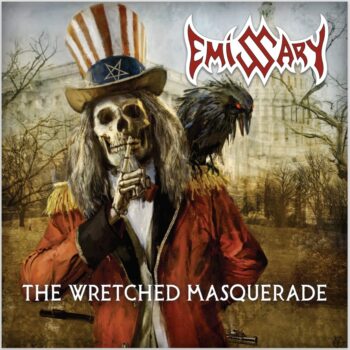 Tim Dahlen and Jym Harris met in early 1993 and realized they had undeniable chemistry for songwriting. At Dahlen’s request, Harris adopted the moniker of his 1989 Las Vegas high school band when they decided to join forces and form a new band. Harris’ lyrics and melodic vocal style complimented Dahlen’s thrash-influenced guitar riffs, so the duo founded what is now known as “The Original” Emissary.

After a few lineup changes, they hired famed LA Guns / Laaz Rockit / Abattoir producer Chuck Rosa to record the band’s most widely distributed demo in early 1994. A few demos later, Emissary was frequently being heard on local radio stations and the band quickly became the most well-known heavy metal act in Southern Oregon. They spent the next two years playing numerous shows across the America West Coast, sharing the stage with heavy-hitters such as Dokken and plenty of others. Unfortunately, the Alt-Rock movement was starting to dominate the Pacific Northwest so fewer opportunities were presenting themselves and Emissary disbanded in early 1996.

More than two decades later, Emissary appeared in the historical book Rusted Metal: A guide to Hard Rock and Heavy Metal in the Pacific Northwest 1970-1995 which led to the former members reconnecting on social media about a possible reunion. In early 2021, Harris and Dahlen reunited with members of the classic 90’s lineup, drummer Eric Hoover and bassist Peter Shawn Kinney. Guitarist Charlie Francipane was added to the lineup and after 25 years apart, Emissary was back!

In August of ‘21 Emissary played their first show in a quarter-century as direct support for veteran rockers Tesla in Grants Pass, Oregon. Later that month, they appeared at California’s Redwood Metalfest alongside notable acts such as Lich King, Mordred, Blind Illusion and Skitzo, before hitting the studio to finish their first full-length album.

The Wretched Masquerade is comprised mostly of new recordings of the band’s classic material, but a deluxe version of the release will feature a bonus disc full of remastered 90’s demos. There is even a guest appearance by guitarist Claudeous Creamer of Bay Area legends Possessed on one track. It was produced by Doug Hill (Helmet / Neurosis / Mastodon), mastered by Jamie King (Between The Buried & Me /Cro-Mags / Flotsam & Jetsam) and features the artwork of Donald Yatomi (Megadeth / Tourniquet / Sylent Storm) on the cover. Both the cd and vinyl are being released by Germany’s Underground Power Records in the spring of 2022.

The Wretched Masquerade will be released independently on cassette and digital download on May 27, 2022 and via Underground Power Records (Germany) on CD on the same date. A vinyl release is scheduled for late 2022.