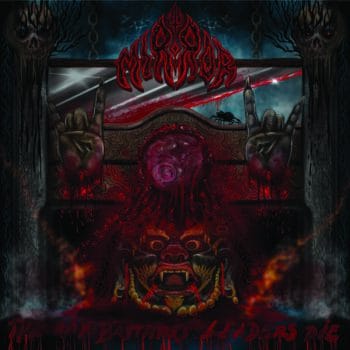 Their eponymous 2015 debut featured the likes of in-demand producer Jaime Gomez, Arellano (Cathedral, Ghost, Paradise Lost) on drums and underground mainstay Matt Olivo (Repulsion) on guitar alongside vocalist Jimmy Mavrommatis and Stamos Koliousis on guitar. That lineup soon gave way to new guitarist Nikolas “Sprits” Moutafis and drummer Daniel Georgiou, who, alongside Tas and Mavrommatis, released the resplendent and firebrand Pyramid of Terror in 2019. With a new record contract in hand with Cruz Del Sur Music, Mirror has emerged even more energized and out for blood with their third studio album, The Day Bastard Leaders Die.
In lockstep with the hallowed sounds of NWOBHM and 1970s proto-rock, Mirror has buckled down on The Day Bastard Leaders Die for songs that are heavier and faster than anything the band has done before. Behind Mavrommatis’s multi-tiered vocal escapades and fervent melodic joyrides, the album’s nine cuts are coated with a sharp, angular degree of songwriting, where twists and turns abound at every corner.

Through it all, though, Mirror continually keeps the focus on the unyielding spirit of true metal. Whether it’s the barn-burning opener “Infernal Deceiver,” the fist-banging “Souls of Megiddo,” the raw, raucous, gutter-ready “All Streets Are Evil,” the up-tempo “Sleepy Eyes of Death” and the exploratory, near-progressive title track, Mirror has unleashed an album that brims with purpose and might.
Recorded in Athens, Greece, with producer/engineer Costa Costopoulous, The Day Bastard Leaders Die is every bit the authentic, rousing album that metal die-hards flock to. It’s ultimately a reminder that metal’s future is often rooted in the past. On The Day Bastard Leaders Die, Mirror set out to drive that point home once and for all.

4. All Streets Are Evil

“Souls of Megiddo” is the first single from the upcoming “The Day Bastard Leaders Die”, to be released via Cruz del Sur Music on April 22nd.Multi-national me…