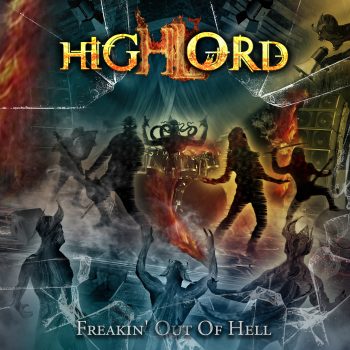 HIGHLORD – Freakin’ Out of Hell

Rockshots Records is proud to announce their latest signing of power metallers Highlord for the release of their new album Freakin’ Out of Hell due out on December 9th.

Infusing heavy-power metal with progressive and symphonic influences was formed in Turin Italy in 1997. Over the span of their career they have released eight albums. Also contributed to two tribute albums for Manowar and Helloween. Have toured all over Europe and performed with Zak Steven’s Circle II Circle, Dark Moor, Freedom Call, Pino Scotto, Vision Divine, Elvenking, Sacred Steel, Seventh Wonder and more along with music featured on movie soundtracks for The Werewolf Chronicles and Blood Of The Werewolf.

For their ninth album Freakin’ Out Of Hell, the band began recording it between May 2020 and December 2021. The album includes 11 tracks of pure power-metal in perfect Highlord style, but with a much more aggressive sound and a touch of prog-metal. Again the album has been recorded, mixed, mastered, and produced in-house by bass player Massimiliano Flak at Evolution Recording Studio (Italy). The album’s artwork was created by Harley Velasquez on a concept by Highlord.

The band adds about the ninth offering: “Freakin’ out of Hell is a solid work from every point of view. Not only the songs are all potential singles, but they have more or less the same average length of 4/5 minutes. We avoided recording the classic long suite just as much as the hit-and-run happier song because in this album we have found the perfect balance between all the elements of our sound. We have also set the average level of heaviness and aggression a bit higher; this is not a happy metal record, it’s a heavy metal piece that fully deserves this definition.”

The album is already available for pre-order through the link below.

Singles are to be revealed in the coming weeks.