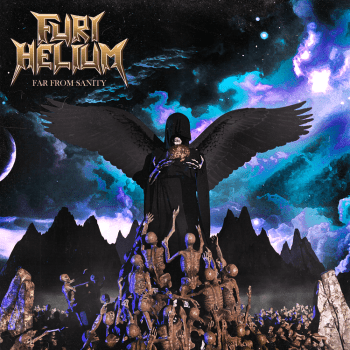 Furi Helium is ready to show up again with their first LP called Far from Sanity to be unveiled in mid-November.

First of all, the idea was to perform covers from typical classical heavy and hard rock metal bands (such as Iron Maiden, AC/DC, Hammerfall, etc.) but they did not have any vocalist. After a brief time, Kírian Bonet joined as a lead singer, and then they started to create their own songs. Two years after the band’s creation, it experimented with some changes, as one of the former guitarists left. Sergio Malagón, the current lead guitarist, replaced him.
In late 2017, their main goal was to publish and launch the band’s debut using songs that had been created before. Finally, 4 pieces were prepared to be recorded by Xavi Escribano (The Anti-Patiks, Malestar Social, Violets) at EM Estudi (Terrassa) in summer’18. This was their first EP, called Releasing Hell.

The new album’s reception was pretty nice, and they could present it in some venues around their zone. After the debut, their former bassist Guillem Sunyer left the band, and Carlos “El Topo” López replaced him.

Since the arrival of the new bassist, they started to cook new songs for the upcoming album called Far from Sanity. The new LP includes up to 11 tracks. It has been produced, recorded and mixed by Dani Salat in Sabadell in early 2022.