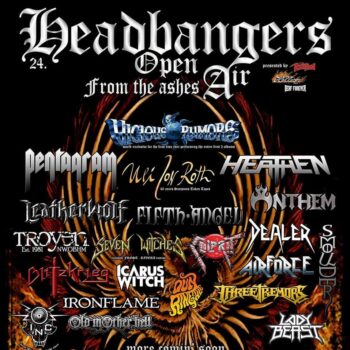 The initial roster announcement for Germany’s Headbangers Open Air Festival 2022 has been uncovered!

A veritable force supporting Traditional Metal, there’s one name on the bill that immediately saw CGCM‘s Rich “The Meister” Dillon scrambling to complete his ticket purchase! So grab some tickets (be warned, the site is not in English, but copying and pasting into Google Translate did a decent job) and join The Meister on location in Germany this July!

Not without reasons, the Headbangers Open Air is called “the biggest garden party of the world“. It takes place in Brande-Hörnerkirchen, near Elmshorn (40 km away from Hamburg). The venue is the yard of a burnt down and restored farm in the middle of nowhere, where the organizer opens his garden every year again for the (at least in the spirit) long-haired metal-hordes. The band choice at the HOA is diversified – from the legends of the 80s and 90s to local heroes, insider tips, underground bands and newcomers, who will also get their chance to play here. The only thing missing is expensive “headliners”, to keep the entrance fee as low as possible.

The stage is raised in the inner yard and the surrounding fields serve as parking lots and campgrounds. Beer and BBQ-shacks, all for reasonable prices, are provided, as well as a metal market.