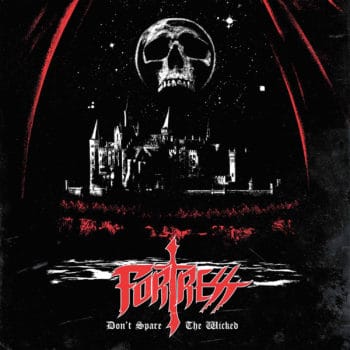 “I see Don’t Spare The Wicked as an evolution,” is how guitarist Fili Bibiano describes the band’s debut album. “The Fortress EP music was co-written with another guitar player initially. So it limited my capabilities in writing and guitar playing. I had to compromise a lot of my musical abilities and taste. So I see this album as something that is more free creatively and something that Initially wanted to write since I was 15 years old.”

In comparison to the EP Don’t Spare The Wicked has a much broader sound ranging from speed metal to classic rock, influenced by bands like Dio, Queensryche and Riot. Fili Bibiano explains: “Some sections like in “Red Light Runner” are heavily inspired by 70s rock bands. Overall I feel like we combined a lot of everything into this album. I do feel like we accomplished this goal. As I said previously, it is a more liberating and creative composition when compared to the first EP.”

The title track is placed as the very last song on the album. It’s also one of the fastest compositions on the record. For Fili Bibiano “Don’t Spare The Wicked” sums up what the album is all about: “We decided to place that one last because like a book an album needs closure. I felt that this song was more of a statement and needed to be the last song you hear. We wanted to create a momentum with each of the songs and I feel that this song was the period at the end of our sentence. I would definitely say listen to “Don’t Spare The Wicked” as the key song to get a feel for what we have to offer on this album. It showcases Chris’ incredible vocal range and it is one of my favorite compositions that I don’t get tired of listening to.”