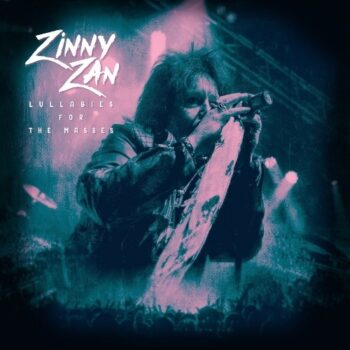 ZINNY ZAN – Lullabies for the Masses

Zinny Zan have released a new single from their upcoming album! The new track is a cover version of Depeche Mode‘s classic hit “It’s No Good”, and is the second single from the Swedes’ new studio album Lullabies for the Masses.

“Stefan and I like to do the unexpectable, and I do not think anyone saw this coming from us,” says Zinny.

Stefan adds: “We love the song and its suggestive feeling and thought that if we added our ZZ spice to this song with a more distinctive drumbeat, some cool guitars, and Zinny’s ability to go from really low range to a brighter voice – we thought that we could do justice to the Depeche Mode hit and add some freshness to the sound as well.”

A cross-over arrangement, or as we say an AC-AT, this song could be played at any club at any time! Turn on – tune in – rock out!

Watch the “It’s No Good” music video below.

Zinny Zan‘s new album, Lullabies for the Masses, will see a May 20th, 2022 release on Wild Kingdom. Pre-order the album below.

Official music video for It’s No Good by Zinny Zan of their album, Lullabies for the Masses.Stream / Buy: https://orcd.co/its-no-goodFollow Zinny Zan on Spot…