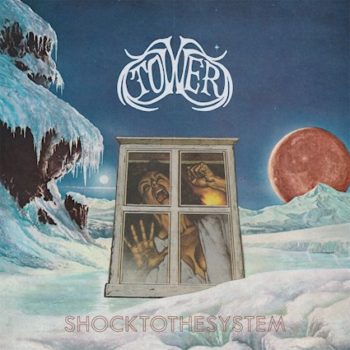 TOWER – Shock To The System

On their first studio album in five years, New York City’s Tower kicks out the jams with vintage metal appeal and classic rock persuasion that brings the old-school into today!

Unexpected disruption. Challenge. Paralyzing chaos and confusion. A reality check. These words all run the gamut of what the world had experienced since the beginning of the pandemic in March 2020. They also serve as the inspiration for Shock to the System, the second full-length album from New York City classic metallers Tower.

Tower was halfway finished with writing Shock to the System when the pandemic hit. It forced the band (comprised of vocalist Sarabeth Linden, the guitar tandem of James Danzo and Zak Penley, and drummer James Jones) to find creative ways to complete the album’s ten cuts. For a band accustomed to regular rehearsals and live appearances, the ensuing lockdown enabled them to get together only once before heading into Artifact Audio in Ridgewood, New York with producer/engineer Sasha Stroud this past May and June. However, the less-than-ideal situation helped spawn an album of immediacy and energy.

The freewheeling nature of the writing and recording process helped give rise to several firsts for Tower. While their trademark vintage metal-on-’70s rock sound is still dominant, elements like thrash and doom have entered the equation (one such song had the working title of “Skynyrd Sabbath”), not to mention some ultra-catchy pop hooks for “On the Line” to the point where Tower decided to omit a guitar solo — yet another first. Elsewhere, “In Dreams” features quiet experimentation in a song that nearly reaches the seven-minute mark, showcasing even more diversity.

Lyrically, Shock to the System tackles political themes, personal loss and the volatility of relationships and life in general. The album features cover art from Morgan Jesse Lappin that details the feelings of isolation the pandemic brought on and the futile attempts to escape a claustrophobic and uncomfortable environment only to find the real world has changed drastically.
And while the outside world continues to rear its ugly head and unending grimness, there is only one thing left to do — put on Shock to the System and turn it up to 11!

Upcoming ReleasesShock to the System, Tower