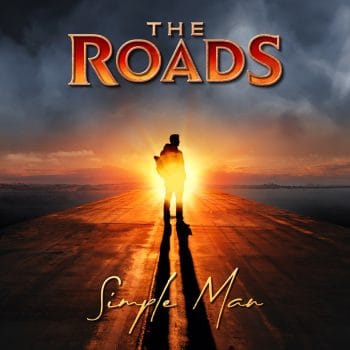 If the definition of a road is a pathway from somewhere – to somewhere, then The Roads is the perfect name for the collaboration of Mick Devine and Gary Pihl. Each musician has had a long journey from humble beginnings to incredible heights. Mick with the band Seven and his solo career and Gary as former Sammy Hagar Band and current guitarist with the band Boston have focused their talents toward a new destination. Their intersection at this moment for their debut, Simple Man, promises to be the culmination of their experience and desire to go farther than they’ve ever been.

The seeds for this musical endeavour were first sown when Escape Music Khalil Turk sent the Turkish Delight song, “Get Out Of Here“, to Gary Pihl so that he could add guitars to it. “I was flattered that he wanted me to participate with the rest of those excellent musicians, but I had some ideas about how to change the groove of the song,” reveals Pihl. “That required changing the drum parts and Khalil gave me free rein to try it. He put me in touch with the drummer, Josh Devine. I’d always admired Josh’s terrific work with One Direction and Levara and as I told him my groove ideas, he knew exactly was I was talking about and of course, made the drum track even better than what I imagined.”

In turn, Pihl wanted to know the identity of the singer, which Josh Devine revealed was his Father, Mick Devine of Escape Music artists, Seven. Never one to miss an opportunity, Khalil Turk could see the chemistry developing and suggested they work together. “After about two minutes on the phone with Mick, I could tell he was a smart and talented guy with a great singing voice and eager to write some thoughtful lyrics and rocking songs,” says Pihl. “That’s what was most appealing to me.”

The songwriting throughout was an equal affair between Pihl and Devine. With Pihl adamant that he did not want it to sound like Boston, he certainly acknowledges that they have been inspired by every other band that’s come before them, but that they strived to be unique. “We never set to write with any direction in mind,” reveals Mick Devine. “The songs naturally formed as we worked making it by far the most collaborative writing partnership, I have been involved in. We very quickly realized that we had something special and the songs we were writing would really stand up and we are both so proud of this work.”

But great songs require great musicians and joining both Pihl and Devine in this exciting new adventure are a myriad of experienced recording artists. According to Pihl, “using Mick’s son, Josh for drums, was the easiest choice.” Having worked with One Direction and Levara, his ideas set the stage for the rest of the musicians to lock into. With Pihl’s Boston partner of over ten years, Tracy Ferrie, joining on bass, the keyboard parts were deftly handled by session player Neil Miller and Winger’s Paul Taylor, an old band alumnus of Pihl’s from years ago. With Lawrence Gowan graciously agreeing to play keys on three songs, Pihl had always admired his work with Styx and of course his own band, Gowan. Even though he was so busy with Styx, through the magic of remote recording, he was able to send his fantastic ideas. “I told him I didn’t want listeners to say, “that sounds like Styx keyboards” I want listeners to say, “that sounds like Lawrence Gowan!”. With Pihl’s son, Scott, adding guitar and Mick’s wife, Lin and son Ben adding vocals, The Roads – a name created by Khalil Turk – were ready to roll.

With Escape having been instrumental in quality releases from both Pihl’s outfit, Alliance, and Devine’s band, Seven, you can guarantee that this album is going to uphold that fine tradition. The album’s sound comes from a time when North American AOR behemoths ruled the airwaves and if you look closely, you’ll detect traces of Styx, Kansas, Foreigner and bands of that ilk in its DNA, but it’s armed with an identity all its own. From the lush, expressive vocals of Devine, through to Pihl’s subtle and understated guitar playing, The Roads is far from a conclusion or end and have created a journey that’s got plenty of miles left on the clock, one that you’ll want to take time after time.

Mixed and Mastered by Dario Mollo