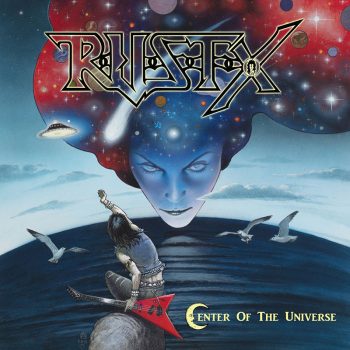 Formed in 2003, the Cypriot rockers were fully determined right from the start. Truly-from-the-heart and no BS melodic HEAVY METAL with classic rocking passages is their absolute passion as one can easily determine with just one listen.

Enthusiastic and passionate about everything R.U.S.T.X do, their upcoming 3rd album “Center Of The Universe” will unquestionably convince old school lovers that they do mean serious business.

The band’s outstanding positive energy and originality are accurately reflected by each of the album’s 10 magnificent songs and so are the band’s influences which are deeply rooted into 70s and 80s Rock and Metal icons.

The level of musicianship in “Center Of The Universe” is beyond perfect and the band sounds completely harmonious and in perfect unity. Not surprising since, not only all band members are seasoned musicians, but all four are siblings (!), 3 brothers and their sister, who apart from their instruments, they all share vocal duties! A most definite (and amazing) family affair!

The band comments: “With this album we really pushed ourselves to the limit and the result is like something out of this planet. A comeback to the 70s and 80s era of Rock and Metal music that we so much adore.”

Legendary radio producer Robert Camassa, who pens a foreword on the album, couldn’t have put it better: “This album is like a swiss clock, ticking along nicely, never skipping a beat. This is a band that has paid its dues and has come roaring back with a killer album. If R.U.S.T.X should ever need a blood transfusion it must be Heavy Metal+.”

The remarkable work of R.U.S.T.X is completed by the magnificent cover created by the amazing Chris Achilleos, known for his unique interpretation of stunning amazons, epic dragons and paintings inspired by ancient civilizations and mythology. His works have adorned hundreds of fantasy book covers in the 70s and 80s and of course he is best known for his painting of the heroine Taarna commissioned for 1981’s “Heavy Metal” animated movie poster.

The album also features guest appearances by Paolo Nipa (DARK QUARTERER) and Andrea Ramacciotti (DEADLY TIDE) and it was recorded and mixed at Woodstock Recording Studio in Piombino, Italy by Andrea Ramacciotti.