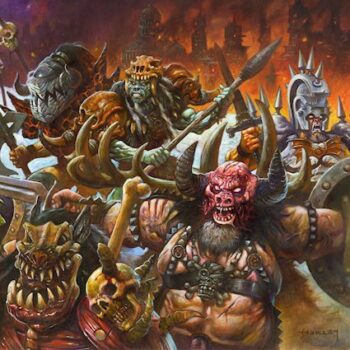 Mythos of The New Dark Ages:

Mankind’s time upon Earth is tracked by “the Ages”: The Stone Age, The Bronze Age, The Age of Enlightenment. Each period of history separated by a key point in time, when the fate of the human race has hung in the balance, perched upon the very precipice of Doom. We stand now at another of these critical moments, the beginning of a New Dark Age! Ancient and unspeakable terrors again plague the Earth, forces that threaten to bring an End to the Age of Man, once and for all. This album tells the story of a timeless evil emerged from GWAR‘s distant past to threaten mankind’s pathetic attempts at evolution, twisting and perverting the modern world and using technology to polarize mankind to the point that reality itself has split into two distinct universes, a…Duoverse, if you will (or even if you won’t)!

The New Dark Ages chronicles GWAR‘s adventures in the Duoverse, where the band rediscovers old powers such as Blóthar’s terrifying Berserker Mode, and encounter new allies, such as the murderous maven known as The Cutter. Along the way, they battle the living monuments of a lost cause and armies of undead soldiers who Rise Again to fight a New Civil War. The New Dark Ages is a journey through the archetypes of the human imagination, as our anti-heroes live again horrific fairy tales such as that of the old Ratcatcher, the Pied Piper, reminding us that the spirit of GWAR is as old as storytelling itself. Having unleashed destructive technology, humans pray The Beast Will Eat Itself, but it is down to GWAR to charge Unto the Breach in an epic battle between science and the supernatural.