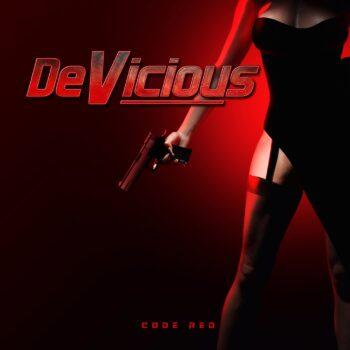 Are you ready for Code Red?
DeVicious and Metalapolis Records are very excited to announce CODE RED, the 5th DeVicious studio album. After 3 highly praised AOR / Melodic Rock albums DeVicious released their commercially most successful album BLACK HEART earlier this year. BLACK HEART was written and released during the dark phases of the pandemic which resulted in a darker and harder sound. While DeVicious was usually getting their inspiration from the 80s, BLACK HEART was inspired by Melodic Metal bands.

With CODE RED DeVicious is returning to their roots! The new album contains 10 brand new Melodic Rock songs, strongly influenced by AOR & Hard Rock of the 80s and arena melodies. The bonus track is a remake of the DeVicious classic “Penthouse Floor”, taken from the debut album NEVER SAY NEVER. It is safe to say that CODE RED is an album that the fans and the band can enjoy together wholeheartedly. The album will drop on May 26th, 2023 and will be available on CD, LP, MC and digital. DeVicious will tour through Europe starting on June 1st to present the new songs and have a party with their fans!