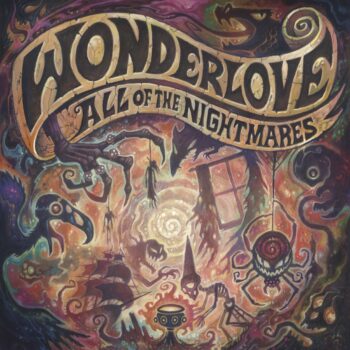 WONDERLOVE – All of the Nightmares

Wonderlove has flown completely under my radar in their long, but sporadic career. Upon its release in February, I liked All of the Nightmares well enough. But each listen brought something new. Now, after almost five months it’s risen to among the top releases of 2022. While lumped in as a prog band, these guys play totally unique, modern, hard rock and roll influenced by the giants of the genre, from Led Zeppelin and The Beatles to Alice in Chains and Muse, by way of Alice Cooper and Alice in Chains. Lover’s of CGCM music would be hard pressed to not find at least one or two songs on this diverse album.

Previous releases from Wonderlove—Getting Off the Revolution and My Submarine— aren’t on streaming services, however, you can pick up physical copies. You have to think most of the band members doing double duty has something to do with it. The band includes two members from the prog outfit Perfect Beings, Jesse Nason on keyboards and Dicki Fliszar (formerly the drummer for Bruce Dickinson). Dave Beste of Rival Sons plays bass, and they are rounded out by Chris Paul Overall on vocals and  Bryan McIntyre on guitars. McIntyre and Overall also wrote the album

All of the Nightmares is the perfect name for this album. Almost every song has a nightmarish theme, from the mundane to the freakily scary.

The first nightmare is the groove-laden, heavy, Alice in Chains-inspired “Dark Harvest“. It’s a great start, but up next is one of the most upbeat songs, “On and On”. It’s a much different song—more stripped-down garage rock— about an equally different, real-world nightmare.

The nightmarish side of everyday life continues in “When the Vultures Die“. Overall crushes the vocals, Nason‘s keyboards meld perfectly with the bass and drums to reinforce the bleakness of the subject.

Powered by the macabre theatrics of Alice Cooper, the weirdness of The Doors, and the layered production of Pink Floyd “Linger” delivers a nightmare circus vibe. It’d be perfect for a Tim Burton-style animated movie soundtrack.

My favorite track on the album, “Where Did Love Go” follows the prog-influence of “Linger” with a brisk, up-tempo hard rock song. It’s a real banger and the chorus is a major earworm.

Some of the scariest horror comes at the end of a slow, tense build-up. For Wonderlove, many of their best moments happen in their slower songs.

“Rain Fall Down” showcases the talents of Overall and McIntyre. I’m not as hostile to ballads as The Meister, but I usually skip the slower songs or pray for a hook. Well, I got the hook. Sounds to me like the Beatles drug through the swamps of 70’s country rock.

Also on the slower side, the proggy “Battles” has hooks too. The lyrics are fantastic and melancholy, layered perfectly in the thickly textured instruments. Where “Battles” features three guitars, keyboards, backing vocals, drums, and bass, “The Burden” is stripped down and raw. It’s worth checking out, especially if you’re in the mood for a sad song.

“Snake Charmer” is a trippy song with a dark atmosphere. I give Heson a lot of props on this one. The rhythmn is haunting. The keyboards snake through the song eerily, and then come to the forefront. This nightmare is the cold, lonely walk through a misty cemetery.

Something For Any Hard Rock fan

The album closes with “Spider Queen” a horror story about Liza and the Spider Queen. It’s a perfect wrap-up to the album—a ghostly blues-drenched nightmare. It caps off a killer ride, paying tribute to some of the greats of rock and roll in their own Wonderlove way.

All of the Nightmares gets better with every listen. A lot of that credit goes to the writers Bryan McIntyre and Chris Paul Overall. The songs are extremely well-written stories of all sorts of different nightmares, from the utter sadness of “The Burden” to the all-out horror story of the “Spider Queen“. Even more impressive is the cohesive album pieced together from individual parts recorded all over the place during the early Covid quarantines.

Check out the video for “When The Vulture Die“. The video is perfectly creepy and a great place to start with them.